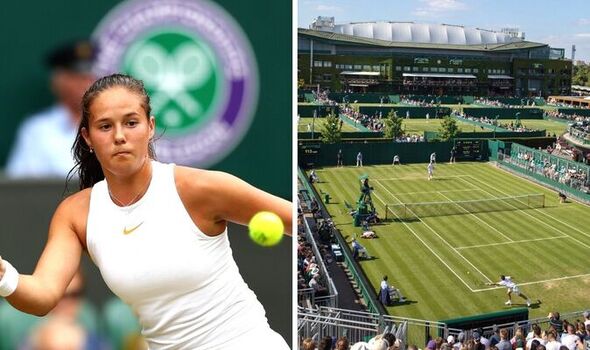 Wimbledon could face sanctions from the women’s tour after banning Russian and Belarusian players from The Championships. Their decision has come under fire from the ATP and WTA, and could now revert in fines or reduced points after WTA boss Steve Simon confirmed there would be a meeting in Madrid to “define the sanctions”.

On Wednesday, Wimbledon confirmed a blanket ban on all Russian and Belarusian players amid the war in Ukraine. They have since faced backlash with the Belarusian Tennis Federation threatening legal action, and the WTA Tour is the latest organisation to look into punishing the tournament for the controversial move.

WTA boss Steve Simon has been vocal in his disagreement with a ban on players from the two nations and has now sent an email to his tour’s players confirming that they were looking into imposing sanctions on both Wimbledon and the LTA, who also banned Russian and Belarussian players from all British grass court tournaments, as a result.

Their “decisions are a violation of both Grand Slam’s and WTA’s rules,” the email, which was seen by L’Equipe, read. Outlining the possible sanctions that Wimbledon and the LTA could face, Simon wrote: “We’ve formally indicated our position by reserving the right to impose appropriate sanctions, which may include (among others) withdrawal of points awarded by Wimbledon, fines or suspension of the membership of the LTA to the WTA.”

JUST IN: Raducanu already has bad Swiatek omens as Brit shuts down comparisons

The WTA CEO and Chairman also confirmed that a meeting would take place between relevant stakeholders in Madrid, where the joint ATP and WTA 1000-point event is being held from May 2, to determine exactly what the sanctions would be. “The council of tournament directors, the Players Association and the WTA office will meet in Madrid to define the sanctions.”

He also addressed players who were looking to take their own legal action, appearing to confirm that some of the Russians and Belarusians on tour were threatening action based on discrimination on the basis that other people from the two nations had not been banned from doing their jobs in the UK.

A public statement from the WTA on Wednesday also condemned the move to ban Russian and Belarusian players from Wimbledon and other British grass-court events. “The WTA strongly condemns the actions that have been taken by Russia and its unprovoked invasion of Ukraine. We continue our humanitarian relief efforts to support Ukraine through Tennis Plays for Peace,” read.

“We are, however, very disappointed in today’s announcement by the AELTC and the LTA to ban individual athletes who are from Russia and Belarus from competing in the upcoming UK grass court events. A fundamental principal of the WTA is that individual athletes may participate in professional tennis events based on merit and without any form of discrimination. That principle is expressly set forth in our rules and has been agreed to by both AELTC and LTA. Prohibitions against discrimination are also clearly expressed in their own rules and the Grand Slam rules.”