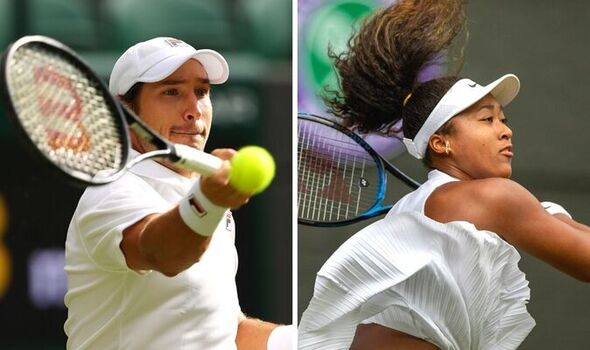 World No 64 Dusan Lajovic has confirmed that “many” players “plan on going to Wimbledon” despite the ATP and WTA’s decision to strip the tournament of its ranking points in response to the ban on Russian and Belarusian players. It comes after the likes of Naomi Osaka admitted they might not play without points on offer.

On Friday, the ATP and WTA both confirmed they would be removing all ranking points on offer at The Championships this summer, with the ITF following suit and stripping points from the junior and wheelchair competitions. The move was made in response to Wimbledon’s ban on Russian and Belarusian players – something the tours were unhappy with – and has left the event as something of an exhibition.

There were fears some players would withdraw from the prestigious Grand Slam tournament without the chance to earn any ranking points, with four-time Major champion Osaka admitting she was considering pulling out, but one top player has now confirmed that multiple players are still planning to compete in SW19 next month. “I believe that some players will skip Wimbledon, but many have told me they plan on going. I do,” former world No 23 Lajovic said after his French Open loss.

The Serb also said he thought the men’s tour should have frozen the ranking points of Russian and Belarusian players instead of taking them away from everyone, but confessed that it was the only real impact the ATP could make to show their disagreement with the ban. “I think the only way for ATP to take a stance was to take the points away,” he continued.

JUST IN: Nadal has to tell French Open camera man to ‘stop’ after Thompson win

“It was their only bargaining chip with the way structure is in tennis. I don’t know why they didn’t freeze last year’s points, I feel that would do less damage to the players.” Lajovic’s words come as two players have already all but ruled themselves out of contention, including former world No 1 Osaka.

“I would say like the decision is affecting my mentality going into grass. I’m not 100 per cent sure if I’m going to go there,” the four-time Grand Slam champion said after crashing out of the French Open in the first round to Amanda Anisimova.

“I would love to go just to get some experience on the grass court, but like at the same time, for me, I don’t want to say pointless – no pun intended -, but I’m the type of player that gets motivated by seeing my ranking go up or stuff like that. So I think the intention was really good, but the execution is kind of all over the place.”

Meanwhile, 2016 quarter-finalist Lucas Pouille doubted that he would play after slamming the “injustice” of taking away points from every single player to protect the Russian and Belarusian athletes. He told L’Equipe: “I was in no way associated with his decision which I do not agree with. I understand the frustration of the Russian players and the injustice of it, I know they have nothing to do with it, but now there is an injustice for 240 players instead of 12.”

The former world No 12 also said he didn’t know any of his colleagues who were happy with the decision, as he continued: “We can’t all pay the consequences. I do not know how the players are going to react. It was never a unanimous decision, that I know. We don’t even know if there was a vote. In any case, all the players I have spoken to are against it.

“It will still remove the fervour from the tournament. At Wimbledon, I imagine they are not going to let it go like that. The prize money will not be the same as expected, it will be reduced. I had decided initially to not play Wimbledon before saying to myself: ‘No, it is still a Grand Slam, you are going to go’ and I signed up for the grass-court tournaments. But I think that I won’t go.”