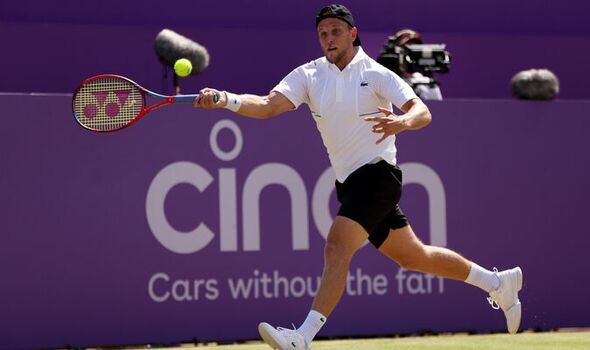 Denis Kudla has spoken out after the US Open confirmed they would not be following in Wimbledon’s footsteps and banning Russian and Belarusian players from competing in the tournament. The American world No 82 was born in Ukraine and still has family members in the country but confessed he “wasn’t against” Russians being allowed to compete in tour.

Kudla earned a lucky loser spot at Queen’s following Andy Murray’s withdrawal and made the most of it by beating Lorenzo Sonego in the first round before pushing defending champion Matteo Berrettini to three sets. After the match, he responded to news that the US Open would be allowing Russian and Belarusian players to compete later this summer.

“It’s a tough situation,” he said of allowing athletes from the nations to compete on tour. “I’m not really too against the Russian players playing, they’re not really the ones that are doing it personally.”

The 29-year-old also admitted he couldn’t expect his Russian colleagues to speak out against the war because of the dangers they could face. Players from the country are banned from competing at Wimbledon but the All England Club had been given the option of letting Russian and Belarusian players compete as neutrals if they signed declarations denouncing the war, though Kudla explained why they couldn’t.

JUST IN: Peniston continues dream debut with gritty win vs Cerundolo at Queen’s

He continued: “It’s hard to make them speak out too because we obviously know what Putin can do. But at the same time I try not to get too involved with what’s going on so it is what it is. It’s not really my decision.”

The Kiev-born American also revealed he had three family members still in Ukraine who remain safe.  “I don’t have a lot of family there, I have an uncle and two cousins. Luckily they’re towards kind of the Romanian border,” he explained.

“But it’s obviously awful to see, we’re keeping an eye on it. I talk to my parents more than anything, they’re the ones who keep in touch every day. If I was doing it everyday it would be kind of depressing, it would be tough to play.

“Luckily they’re doing fine but obviously everything else that’s happening is pretty awful and I just try to talk to my parents and they keep me updated.”