Home » Tennis » Tomljanovic out, Serena through to third round after second-set blip 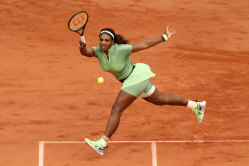 Serena Williams has not advanced beyond the fourth round in Paris since 2016.Credit:Getty

“I had some really good chances in the second set to win that if I would have won just one point here or there, like four or five times it would have been a different second set,” Williams said.

“Going into the third I just had to zero in on those one important points. If I could just take those, it would be an easier time for me.”

Williams was 4-0 up after breaking twice in the decider but the scoreline did not reflect the fight the Romanian put up to stay in the contest.

Williams’s experience, however, prevailed in the key moments as she set up a meeting with fellow American Danielle Collins.

She has fallen in four grand slam finals and earlier this year lost in the semi-finals at the Australian Open.

Following that she underwent oral surgery and played only three Tour-level matches heading into the French Open, winning one.