Frances Tiafoe has tipped a “big 12” to emerge within the men’s game once the Novak Djokovic, Roger Federer and Rafael Nadal era of domination ends following his shock US Open triumph over the latter. The American named six aspiring stars, including Nick Kyrgios, who he believes can go on to succeed the trio at the top of the sport.

No 22 seed Tiafoe caused an almighty upset on Monday, defeating 22-time Grand Slam champion Nadal 6-4 4-6 6-4 6-3 to advance to his first ever US Open quarter-final. The 24-year-old joins seven others who are also searching for their maiden Majors, with a new Grand Slam champion set to be crowned at Flushing Meadows this Sunday.

The quarter-final line-up has offered up a rare glimpse into the future of men’s tennis in the absence of Djokovic, Federer and now Nadal. Three-time US Open champion Djokovic was denied entry to the United States due to his unvaccinated status while five-time victor Federer missed the Major due to his ongoing recovery following knee surgery last year.

When probed over whether the quarter-final line-up offers an insight into a changing of the guard, Tiafoe tipped a “big 12” to emerge within the sport, while acknowledging himself, Kyrgios, Carlos Alcaraz, Jannik Sinner, Tommy Paul and Taylor Fritz as six to look out for in particular. The American said: “Yeah, I think Nick [Kyrgios] is playing great tennis, and is great for tennis.

DON’T MISS: Cam Norrie crashes out of US Open in Andrey Rublev defeat as all British hopes end 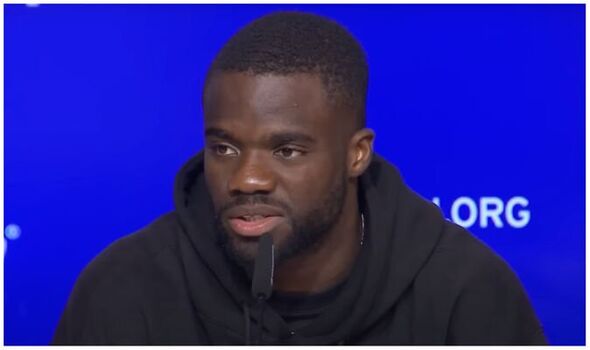 “You see him packing stadiums when he’s playing singles, doubles, whatever. [Carlos] Alcaraz is a great personality. [Jannik] Sinner. Myself. People get behind me. You know the American guys, Tommy [Paul], [Taylor] Fritz. 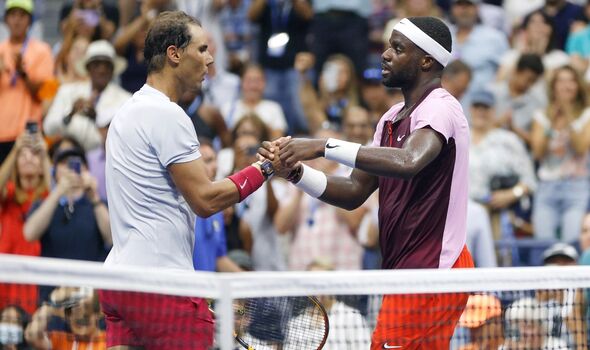 “For sure you’ll probably have someone who probably will cement and be at the top. That’s still kind of happening. We’ll see who that person’s going to be. It’s cool to see a new era.”

Djokovic, Federer and Nadal are commonly referred to as ‘The Big Three’ have dominated the men’s game for the past two decades. Since the 2003 Australian Open, the trio have claimed 63 of the past 78 Grand Slam titles. However, on Sunday, a new Grand Slam champion will be crowned.