Two-time Australian Open quarter-finalist Tennys Sandgren will miss this year’s Melbourne major as the vaccination mandate for officials and players continues to affect the draws.

The 30-year-old American, a vocal critic of the quarantine measures at last year’s Australian Open, won’t be coming to Melbourne for the first time in 10 years.

Sandgren, a quarter-finalist in 2018 and 2020, became the face of the tournament’s COVID-19 chaos a year ago when he was allowed on a chartered flight to Australia after his positive test was deemed to be “viral shedding”. 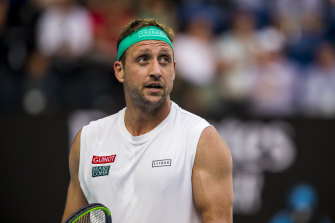 Tennys Sandgren, pictured at the Australian Open in 2020, isn’t coming back. Credit:Getty Images

Tennis officials have said that vaccination rates among the ATP and WTA playing bodies were at least 95 per cent. Events in Australia this summer are the first time players have faced mandatory vaccination, but other tournaments in different jurisdictions are expected to follow suit.

“Tennys Sandgren is pulling out of the #AusOpen because of the vaccination requirement here,” Rothenberg, who is in Melbourne, wrote.

“Sandgren did not try to apply for any medical exemption, he told me, because he did not meet any of the criteria listed for one.”

Sandgren joins an Australian Open doubles champion, Pierre-Hugues Herbert, in pulling out due to the mandate.

The Frenchman said the future was “rather bleak for the unvaccinated”.

“I don’t think he’s the only one to have had one. And I wouldn’t like to be in his place when getting off the plane because he won’t have, I think, a welcome worthy of a world No. 1. If [Novak Djokovic’s medical] exemption was accepted, it was accepted for valid reasons,” Herbert told L’Equipe.

“I say to myself that maybe there will be a ray of hope to come out of this ultra-divisive theme. For now, the future is rather bleak for the unvaccinated.”

Djokovic’s revelation on Tuesday night that he was travelling to Australia to defend his title after getting “exemption permission” was met with widespread community anger.

Support for Djokovic, however, came from Katarina Pijetlovic, an advisory board member of the Professional Tennis Players Association – an organisation which, with Djokovic’s backing, is taking on the tennis establishment.

“He and other others have received exemption from Victoria gov after a rigorous review process by the relevant medical boards,” Pijetlovic tweeted.

“[The] hysteria and spreading blind hatred about it have to stop.”

The Victorian Government has encouraged Djokovic, due to arrive in Melbourne on Wednesday night, to detail the reason for his exemption, as Tennis Australia indicated most of the 26 exemptions granted to players or officials were to those individuals infected with COVID-19 in the past six months.

Russian player Natalia Vikhlyantseva was unable to travel to Australia due to her vaccine, Sputnik V, not being recognised by Australian authorities.

Locally, emerging Australian teenager Olivia Gadecki is skipping the summer because she doesn’t want to get vaccinated for COVID-19.

The 19-year-old shot up the rankings this year and represented Australia in doubles at the Billie Jean King Cup finals in November. One year ago Gadecki did pre-season training with fellow Queenslander and world No.1 Ashleigh Barty.

While none of the playing bodies have mandated vaccination for their members, a WTA spokesperson said: “Each tournament with their local governments/jurisdiction dictate the vaccine mandates – at this point in time.”