Greek tennis player Michail Pervolarakis says he has tested positive for coronavirus upon arrival in South Africa after leaving Australia.

Pervolarakis did not play in the Australian Open, but did compete in the ATP Cup as late as February 5 against Spain’s Pablo Carreno-Busta, having earlier played matches against Australia’s John Millman and doubles pair John Peers and Luke Saville. 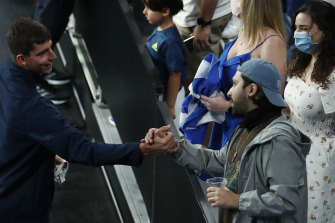 The tennis player posted to his Instagram story at 9pm on Saturday to let his followers know of the news.

He left Melbourne on February 9 – the day one airport terminal was listed as an exposure site for a COVID-19 case.

The ATP Cup was held at Melbourne Park, with the Greek player photographed shaking hands with spectators following a match against Spain. Pervolarakis’ movements after his last matches within Victoria are unknown.

“Hi everyone. After a 24 hour+ travel day from Australia to South Africa I have been diagnosed positive to COVID-19,” he wrote on Instagram.

“I am completely asymptomatic at the moment and will have to quarantine in an isolation facility in Potchefstroom.

“I am not a person that complains but I feel that I need to express my disappointment at the conditions we are in.”

A Tennis Australia spokeswoman said Pervolarakis flew out of Melbourne on February 9 and returned a negative test on that day. It is not known where if he stopped over anywhere after leaving Melbourne. 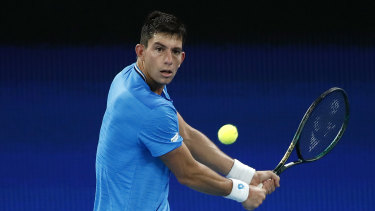 Michail Pervolarakis of Greece during an ATP Tour match against Pablo Carreno Busta of Spain on February 5. Credit:Getty

The entirety of Terminal 4 at Melbourne Airport between 4.45am and 2pm on February 9 has been declared a tier one coronavirus exposure site by Victoria’s health department.

Anyone there at that time has to get a test and isolate for 14 days. It is not clear if Pervolarakis was in Terminal 4 at this time.

It is also not known where he caught the virus or what type of test he received upon arrival in South Africa.

The player and Victoria’s health department have been contacted for comment.

The Australian Open is going ahead without crowds despite Melbourne’s lockdown.

Get our Coronavirus Update newsletter

Stay across the news you need to know related to the pandemic. Sent Monday and Thursday. Sign up here.

Does Eddie Jones face a fight to stay in the England hotseat?