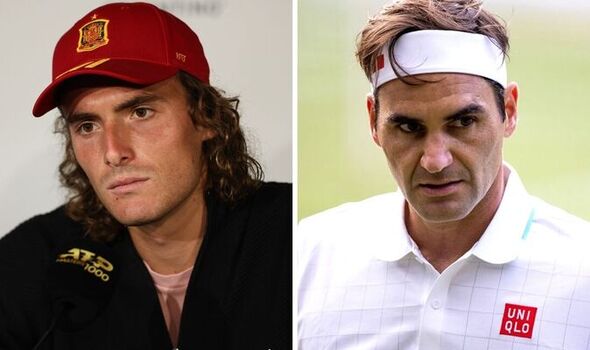 Stefanos Tsitsipas has claimed there is now a ‘Big Two’ instead of the famous Big Three in tennis, as he snubbed Roger Federer for Rafael Nadal and Novak Djokovic. The world No 5 also admitted he thought the pair wouldn’t be leaving the sport any time soon as he explained the difficulty in facing them.

While the 23-year-old had written off Federer, he backed Djokovic and Nadal to continue dominating the sport in the near future as he conceded he would still need to get past the dominant duo in his quest for titles. “And these two, Nadal and Djokovic, are still around, playing very well. In very good shape apparently,” he continued.

“I don’t think they will go away any time soon, they are playing well. They are a huge hindrance when I have played against them.” The Greek has won just two of his eight matches against Djokovic and two of his nine against Nadal, and said it was difficult to face the ‘Big Two’.

“They make the competition very tough,” he admitted, going on to explain how he and his fellow young stars were able to start pushing through for victories. “But we have different weapons that you can fight back with and the innovative play styles that are coming out now can work in our favour.”

Tsitsipas is fresh off the back of a successful title defence in Monte Carlo, where he became the sixth man in history to win back-to-back titles in the principality and the fourth ever to successfully defend his maiden Masters 1000 title. With the likes of other youngsters like Carlos Alcaraz joining the Masters winners circle and Daniil Medvedev managing to win Grand Slams in the ‘Big Two’ era, the world No 5 was happy to see new faces lifting titles.

“Yes, of course. People really like to see different names,” he said. “When you win for so long, people might get tired of it, and when something fresh and different comes along, we see it in other sports, it gives you more options to make a good result.”

And the eight-time title winner will be hoping to lift the one big trophy he had never attained before – a Grand Slam. He led Djokovic by two-sets-to-love in his first and so far only Grand Slam final at the French Open last year before falling in five, and will be out for revenge this time around.