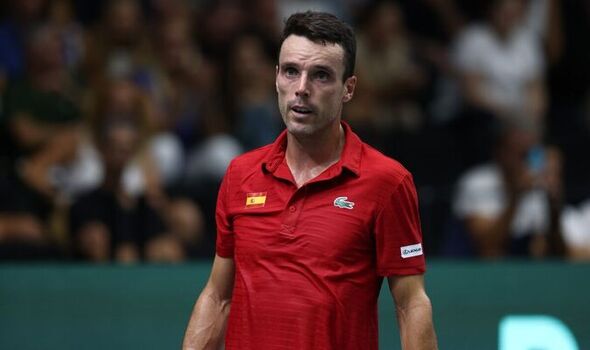 Roberto Bautista Agut has pleaded with Spanish fans to come and cheer on the team in their Davis Cup Finals tie after it was scheduled at the same time as Spain’s first World Cup game. The nation will face a strong Croatian team in the tournament seen as the World Cup-equivalent in men’s tennis and the world No 21 said that the home team “need” support.

Spain is hosting the Davis Cup Finals this week in Malaga, though the squad has been left without their top two players in Carlos Alcaraz and Rafael Nadal after the world No 1 got injured while the 36-year-old previously admitted he couldn’t commit to the team tournament this year. In their absence, Bautista Agut has issued a plea for fans to come and support the team in a “complicated” tie against Croatia on Wednesday after it was scheduled at the same time as Spain’s first World Cup game against Costa Rica.

The 34-year-old will be the country’s No 2 player this week in the absence of Alcaraz and Nadal, and thought it could make things even harder for the team as they take on last year’s runners-up and top-ranked nation Croatia. “A Davis Cup and more in Spain is not experienced every day,” he said ahead of their first knockout tie.

While the team and the fans were set to miss Spain’s first World Cup game, the 11-time title winner put his faith in the home crowd to come and support them in their tie against Croatia as he admitted they needed all the help they could get. “We would all like to see Spain’s game in Qatar,” Bautista Agut continued.

JUST IN: Novak Djokovic’s coach lays bare what makes him ‘even better’

“I am sure that the people will come to cheer and the stadium will be full. We, in such a complicated tie, we need the support of the public.” The former Wimbledon semi-finalist will be Spain’s second-ranked man in the team behind Pablo Carreno Busta this week, and the world No 13 said he had faith in himself and Bautista Agut.

“The Davis Cup is different because you play for the team. It has nothing to do with the circuit,” this year’s Montreal Masters champion stated. “It is true that Alcaraz and Nadal are not there, but we have a good team and we will do our best to win the title.

“It’s nice to be number one, but I would prefer to be number three if Carlos and Rafa were there because we would be stronger. In any case, I feel ready. Both me and Roberto have already played many qualifiers.”

And the 31-year-old thought that the lack of top players at this week’s Finals made the tournament even more exciting, while the team could also benefit from a more level playing field. Carreno Busta added: “Today everything is very even and with only two top 10 in the tournament even more so. The equality is beautiful because all the qualifiers are going to be exciting.”