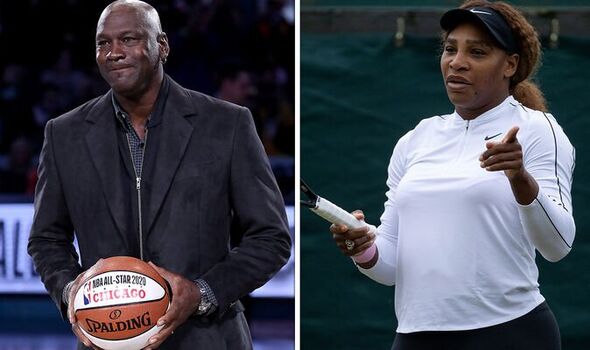 John McEnroe has compared “icon” Serena Williams to Michael Jordan as she prepares for her potential last dance at Wimbledon. The 23-time singles Grand Slam winner will return to action for the first time in nearly a year playing doubles at the Rothesay International Eastbourne this week.

And the American superstar will then make her latest – and perhaps final – bid to equal Margaret Court‘s record of 24 Grand Slams after accepting a Wimbledon wildcard into the singles. She has not won a Major since becoming a mother in September 2017.

NBA legend Jordan’s final season with the Chicago Bulls was chronicled in the Netflix series The Last Dance. Playing Wimbledon and the US Open this summer could prove the last chance for Williams, now 40, to make more history.

She limped out of SW19 in tears last year after twisting her ankle in the first round and has not played a competitive match since. Now the return of the seven-time Wimbledon champion is set to transcend tennis and become one of the biggest talking points of The Championships.

“Serena’s obviously been trying to get that one to tie Margaret Court and win that first one since she had a kid,” said BBC commentator McEnroe. “But she seems to have become, I believe it’s all around the world, but certainly in America, she’s up there with like Michael Jordan and the all time great athletes icons.”

There is no doubting the sporting and cultural impact that Williams has made on sport and society. But the world No.1208’s current condition and ability to play Grand Slam tennis is a mystery. Her former coach Patrick Mouratoglou is now working with Simona Halep and her comeback was only confirmed on Tuesday.

“I haven’t seen her – no one has seen anyone, really,” McEnroe added. “And so now we’re finally getting to Wimbledon. Last year the fans were like: ‘This is amazing’. And then to see what happened last year, you hate to see someone like Serena go out like that.

Williams won her last Grand Slam title at the 2017 Australian Open when she was already pregnant – and has since lost four finals as a mother without winning a set.

She has twice played in Eastbourne – in 1998 and 2011 – and this year will sharpen her grasscourt skills playing with Ons Jabeur.

“I am still over the moon with the news,” said the Tunisian world No.4. “I am really lucky that she picked me and hopefully we will make a great team. I cannot wait to play with her – she is such a legend. I love Serena – the way she plays, the way she is on the court and outside the court. I cannot wait to play alongside her at Eastbourne. I will try and make zero mistakes!”

The 2014 Wimbledon finalist Eugenie Bouchard has pulled out of Wimbledon because there are no ranking points on offer.

The Canadian former world No.5 had shoulder surgery last year and no longer has a WTA ranking but could have played using her protected ranking.

But Bouchard, now 28, post on social media: “Due to my shoulder surgery, I get a limited number of protected ranking (PR) entries.

“As much as I love Wimbledon and skipping it makes me sad, using a PR entry at a tournament with no ranking points doesn’t make sense. I must choose wisely and use my PR entries at tournaments that will help me get back to where I want to be.”

“I will now use my two Grand Slam PR entries for the U.S. Open and the Australian Open.”

John McEnroe is part of the BBC’s Wimbledon 2022 line-up. Catch all the action across BBC TV, radio and online from Monday, June 27.