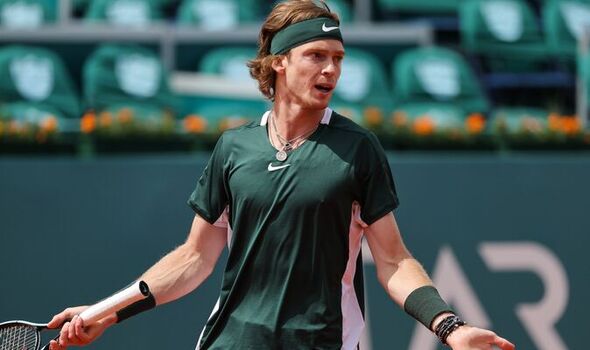 Andrey Rublev has slammed the ban on Russian and Belarusian players at Wimbledon as the Belarusian Tennis Federation threatened legal action. The All England Club and the LTA have announced players from both countries will not be allowed to play at The Championships because of the invasion of Ukraine.

Now world No.8 Rublev has joined the ATP and WTA in braning the decision as “discrimination”. Speaking at the Serbian Open, the Russian said: “The reasons they gave us had no sense, they were not logical. What is happening now is complete discrimination against us.”

The BTF branded the ban “illegal” and claimed “double standards” because British and American players were not penalised following “armed conflicts” in Iran and Afghanistan. The Belarusian statement warned: “Illegal decisions of international tennis organisations in relation to our athletes undermine, first of all, the reputation of these organisations, and the inconsistency of statements and actions between them only confirm the incompetence and unilateral decision-making.

“At the moment, consultations with international law firms on sports law are ongoing and a strategy is being developed that is aimed at protecting, first of all, Belarusian tennis players around the world, and tennis in the Republic of Belarus as a whole.”

Kremlin spokesman Dmitry Peskov claimed the decision “simply turned athletes into hostages” and added: “With our athletes at the top of the world rankings, the competition itself will suffer from their removal.”

World No 1 Novak Djokovic, who has described the Wimbledon ban as “crazy”, reached the semi-finals in Belgrade by beating Miomir Kecmanovic 4-6 6-3 6-3. “I will always be the first one to condemn the war,” he told reporters in Belgrade after his win over Laslo Djere on Wednesday.

“As a child of war, I know what kind of emotional trauma a war leaves. Us in Serbia, we know what was happening here in 1999. Ordinary people always suffer – we’ve had lots of wars in the Balkans. That being said, I cannot support the Wimbledon decision. It’s not the athletes’ fault. When politics interfere with sport, it usually doesn’t turn out well.”

Explaining the decision, a statement from Wimbledon organisers announcing the ban said: “Given the profile of The Championships in the United Kingdom and around the world, it is our responsibility to play our part in the widespread efforts of government, industry, sporting and creative institutions to limit Russia’s global influence through the strongest means possible.

Explaining the decision, a statement from Wimbledon organisers said: “Given the profile of The Championships in the United Kingdom and around the world, it is our responsibility to play our part in the widespread efforts of government, industry, sporting and creative institutions to limit Russia’s global influence through the strongest means possible.