Novak Djokovic would be well advised to resist his trademark “heart-throwing” celebration on Rod Laver Arena this year. Judging by the derision heaped on his medical exemption to pursue a 10th Australian Open title in Melbourne, he is poised to become the country’s least popular visitor since Katie Hopkins was deported last year for her boasts about breaching hotel quarantine.

A city that has endured six lockdowns, and where being double jabbed is a condition of entry to every communal space, is unlikely to take kindly to tennis’ foremost vaccine sceptic being ushered through the VIP lane at Tullamarine airport.

And yet the haste to condemn Djokovic is driven more by emotion than logic. He is not the first guest of Australia to be spared edicts imposed on the public. In 2020, there was allegedly a no-exceptions policy on 14-day hotel quarantine – only for Lord Alan Sugar, filming Celebrity Apprentice in Sydney, to be allowed to isolate at a private residence. There is nothing like a pandemic, it seems, for highlighting the tension between Australia’s love of hard and fast rules, and its genuflection at the altar of celebrity.

Not only were Australian Open officials wary of sparking a diplomatic incident by excluding Djokovic, they were also acutely aware of the need to attract him. The tournament is wounded by the absence of crowd favourite Roger Federer, and still nursing a loss of about $100 million after holding last year’s instalment in the strictest of biosecurity bubbles. Spurning Djokovic no longer makes sense on epidemiological grounds, either.

Having spent two years imagining it could hold COVID-19 at bay indefinitely, Australia is drowning under the Omicron surge. In Victoria, a state where an extraordinary 93 per cent of over-12s are fully vaccinated, there were 14,020 new cases recorded on Tuesday.

Despite the seductive populism of the “one rule for Novak, one rule for everyone else” argument, the raw numbers of Australia’s predicament do not suggest his arrival will add to its problems. The resentment towards Djokovic can be distilled to one powerful truth: Melburnians, indeed anybody who has had to live through lockdown cycles, desperately want to believe their sacrifice has served a purpose. 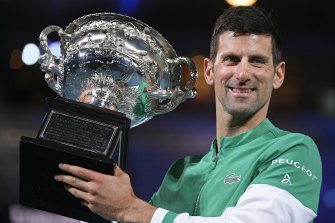 Novak Djokovic with his spoils after winning the 2021 Australian Open. Credit:AP

Given the restrictions imposed by the Victorian government in the worst periods, this instinct is understandable. When you have had “the rules” drummed into you by the state government, you will hardly relish the prospect of a tennis player running roughshod over the same procedures.

The inconvenient reality, though, is that this gap between the freedoms of elite athletes and those of the public has been a feature of the COVID age. Granting Djokovic a dispensation might seem dubious when every attendee at Melbourne Park this year is required to show proof of vaccination. Why should he be different? Quite simply, because he is a 20-time major champion, whose very appearance in Australia confers priceless prestige on an event still struggling financially.

You can say this makes a mockery of state rules. But for all the state’s vigilance, about one in four Victorians taking PCR tests for the coronavirus are returning positive results. How will Djokovic be making the situation any worse?

Yes, his presence will be wildly controversial. But that alone does not make it wrong.

Watch the ATP Cup live on Channel 9, 9Gem and 9NOW