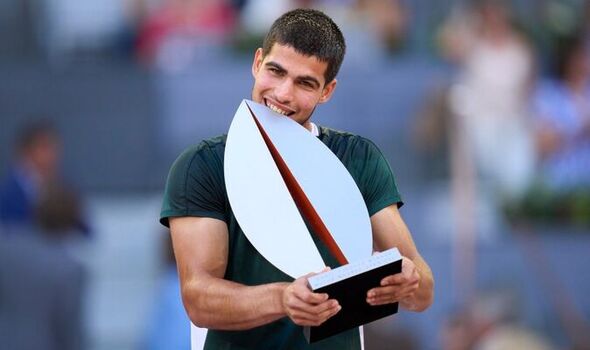 Rafael Nadal’s uncle, Toni Nadal, has named Carlos Alcaraz one of the favourites to win the French Open after his recent success in Masters 1000 tournaments. The prospect of a Nadal vs Alcaraz rematch at Roland Garros is enough to make the mouth drool as the latter continues his rise as one of tennis’ most promising young stars.

The 19-year-old’s recent triumphs have seen him skyrocket up to sixth in the ATP World Rankings, just two places behind Nadal. And the 21-time Grand Slam winner’s uncle has touted Alcaraz as one of the favourites to stand tall at Roland Garros, where Nadal is a record champion.

“We have many years left of a great Alcaraz,” Nadal said. “I already said that he was the best positioned to replace players like Roger Federer, Rafael Nadal and Novak Djokovic, who are already 40, 35 and 34 years old. He added: “He will be one of the favourites at Roland Garros. We have many years left to enjoy Carlos.”

Nadal heaped praise on Alcaraz and his recent form, stating the up-and-coming Spaniard ‘has it all’. He added: “Alcaraz has been demonstrating his potential in each tournament he participates in, in which he would highlight the speed with which he manages to generate power in each of his shots.

“It is impressive, but apart from that, a very complete tennis player, very fast, practically plays very well, and it has it all. There was already talk of Alcaraz when he was little, and a few years ago, his manager decided that he should continue with [Juan Carlos] Ferrero. And it has been a good success because he has continued to improve. What he promised then is being fulfilled.”

The Mallorca Championship is Spain’s only grass tournament on the ATP Tour, and Nadal has requested Alcaraz to feature this summer. He has confirmed that tournament organisers are trying to secure the teenager for the second-ever edition in preparation for Wimbledon.

“Everything will depend on the calendar that his team chooses before the Wimbledon tournament,” Nadal admitted. Alcaraz will next take to the court at the French Open after announcing his withdrawal from the Rome Masters.