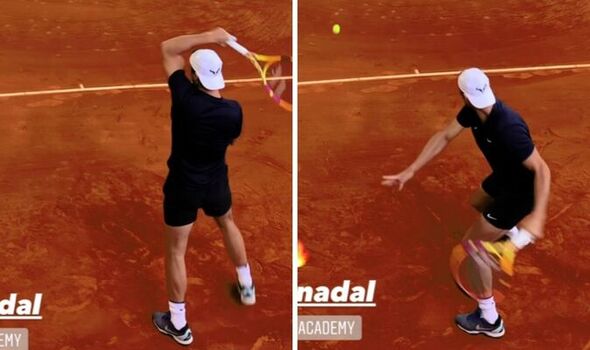 Rafael Nadal has been filmed practising on the clay courts of his Rafa Nadal Academy as he continues his recovery from a rib injury. The world No 4 only returned to the court earlier this week and is targeting a comeback at the Madrid Masters, starting in less than two weeks.

Nadal was captured firing his trademark lefty forehand on one of the clay courts at his academy in Manacor on Thursday, days after making a return to the practice court after picking up a stress fracture in his rib during his Indian Wells semi-final. On Monday, the 21-time Major champion confirmed he was back on a court for the first time in four weeks after being forced to skip this week’s Barcelona Open.

His uncle and former coach Toni Nadal then revealed that the world No 4 was targeting the Madrid Masters, held in the first week of May, for a comeback following his return to a tennis court. And the man dubbed the ‘King of Clay’ is already familiarising himself with the surface after missing out on the start of the clay swing in Monte Carlo and Barcelona, as he will be gunning to win a 14th French Open title at the beginning of June to extend his all-time Major title record to 22.

Dozens of fans and fellow players at the Rafa Nadal Academy turned out to see the 35-year-old getting a practice session in as part of his recovery. “Guess who?” the Academy wrote on Instagram, showing a small crowd gathered at the balcony of the practice court, before sharing some footage from his practice session. Nadal later stopped to sign autographs for the fans who had been watching him rally.

It comes after Toni told TVE that his nephew would be travelling to Madrid and seeing how he felt ahead of the tournament, expecting him to compete if everything was in order. “He told me yes, that he would arrive. Then, we’ll see,” the current coach of ATP No 9 Felix Auger-Aliassime said.

Speaking the day after Nadal returned to the practice court, he added: “Yesterday he started training and he still has 15 days left to see how everything evolves. If he arrives in good condition, he will play.”

The five-time former champion in Madrid will have some tough competition, with Novak Djokovic finally playing a more normal schedule after being kept out of the Australian Open, Indian Wells and Miami to start the season. Andy Murray will also be in action at the event after taking a wildcard to get some competitive matches in before the grass-court season.

The world No 4 would then go on to play the Rome Masters before the French Open. Nadal crashed out in the quarter-final of Madrid to eventual-champion Alexander Zverev last year and was defeated by Djokovic in the French Open semi-final, so will be hoping to make it all the way to the title at both events this time around.