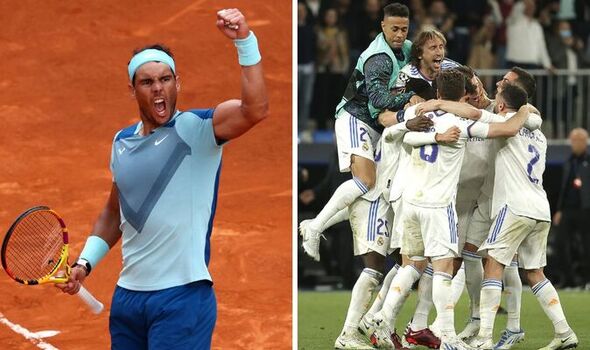 Rafael Nadal admitted that Real Madrid’s spirit in their comeback against Manchester City “inspired” him during his three hour and 10 minute battle against David Goffin on Thursday. The Spaniard blew two match points in the second set before saving four against the world No 60 in the final set tiebreak, finally closing out a 6-3 5-7 7-6(9) victory to advance to the quarter-finals.

Nadal looked on course to cruise through to the last-eight at the Madrid Open when he held two match points just under 90 minutes into his match against former world No 7. But much like the second leg of Real Madrid’s Champions League semi-final on Wednesday night, the scoreline started to switch as Goffin won four games on the bounce to take the second set 7-5 and force a decider.

But the world No 4 was able to fend off his resurgent opponent and win through in a final set tiebreak, and afterwards credited Real Madrid’s “spirit” for inspiring him to get the win, having been in attendance at the Santiago Bernabeu last night. Told that his match was as thrilling as Real Madrid’s comeback against Man City, the Spaniard said: “Well yeah thanks for that. Yeah yesterday have been an unforgettable night.

“The spirit that real madrid have is just incredible and for me today in some way have been an inspiration, no?” While he looked to the La Liga champions for inspiration, the 21-time Major champion also noted that he has “always had that fighting spirit”.

After saving four match points before managing to close out the victory on his own fourth match point, the five-time former champion admitted he was unhappy with his inability to get things done in straight sets.”Honestly it have been a very tough match,” he said.

“I think David played a very high level but at the same time I am not completely happy because I think I had to finish the match in straight sets without a doubt.” The rollercoaster third-round battle was also just the second match of Nadal’s comeback, as he was recently sidelined for six weeks by a rib injury he picked up in Indian Wells.

Nadal, who also witnessed Real Madrid’s 35th La Liga title win on Saturday and took the honourary first kick, said that it was good to get a marathon match under his belt so early on in his return from injury despite being annoyed that he couldn’t take his first two match points.

“Well the victory first of all, three hours ten on court, that helps to increase my physical performance. And a very important victory saving match points, that’s confidence, that gives me the chance to keep going. I need matches and I need days like today to be fitter sooner.” Into his 99th career Masters 1000 quarter-final, Nadal will face either Carlos Alcaraz or Cam Norrie on Friday.