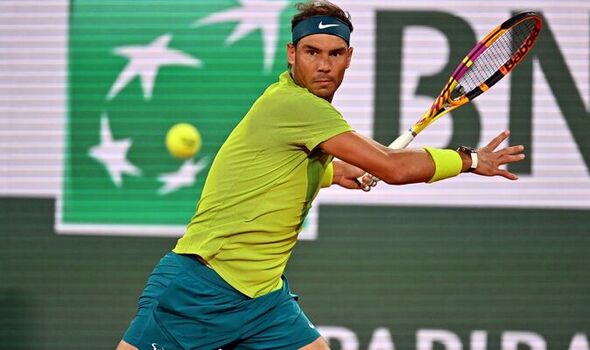 Rafael Nadal sounded cautiously optimistic after his 6-3 6-1 6-4 win over Corentin Moutet in the French Open second round. The 13-time champion in Paris called the tournament the “most important” of the year for him and was happy to keep progressing through the rounds after a recent injury scare at the Italian Open.

Nadal had been in doubt to play his most successful tournament after his chronic foot injury flared up during his three-set loss to Denis Shapovalov in Rome, in what was just his second event back from a rib injury he picked up in Indian Wells. But the fifth seed in Paris now finds himself into the third round having dropped only 16 games across his two straight-set victories against Moutet and Jordan Thompson.

Speaking after his two-hour win over the French lefty, he spoke about his gradual return from the rib and foot issues as he told Fabrice Santoro: “Well it’s a diary work, it’s a work of every day. Of course, the last couple of months haven’t been easy, even [though] the beginning of the season has been fantastic, unforgettable and very emotional. After Indian Wells I had the problem on my rib, U had to be off the court for a while so it’s day by day work, the victories helps a lot and playing rallies with matches like tonight [is] so important so that gives me the chance to have another practice tomorrow and then another match after tomorrow.”

And the 21-time Grand Slam champion sounded quietly confident as he said he was ready to see what happened at his most successful tournament, where he could extend his record to 22 Majors and 14 French Opens. “So day by day just enjoying the fact that I’m in Roland Garros, most important tournament of the year for me so far, just enjoying that fact and let’s see what can happen,” he added with a smile.

The retired Frenchman also asked the 35-year-old about his Rafa Nadal Academy in Mallorca during his on-court interview, with Nadal admitting he would remain heavily involved despite playing on the tour full-time. “Well of course it’s a very personal and familial project, I mean we are super excited about the project and happy because we are a very young academy but we have people, kids from over forty countries working, studying, practicing tennis every single day and I think we created the right team, the only thing that we can do is as much work as possible to give the kids the best services possible.

“At the end of the day it’s the moment to help the kids to become better players but at the same time to grow with the right values so of course I still play tennis but it’s a project that I’m gonna be very involved with.” And the world No 5 also touched on having crowds return in full force at the French Open following the pandemic, adding: “Well I think [it has] been a very, very sad and tough years for everyone around the world. We have been suffering and a lot of families lost somebody.”

He continued: “We (tennis) are just a small part of this world that we suffered a little bit but of course I think it’s so important for the world to see again the best events of the world with [a] full crowd. That’s so important I think for the players, for the fans, for the tournament so that makes the life again happier and that’s the most important thing more than anything so thank you very much for keep supporting our sport.”

And after he got off court following a routine straight-sets win, Nadal proved he had put his recent injury woes behind him in his press conference as he asked to stop discussing his physical state. “I’ve talked enough about my health. I’m in the competition. Now it’s the moment to think and to talk about tennis,” he said, showing his eyes are firmly on the prize in Paris.