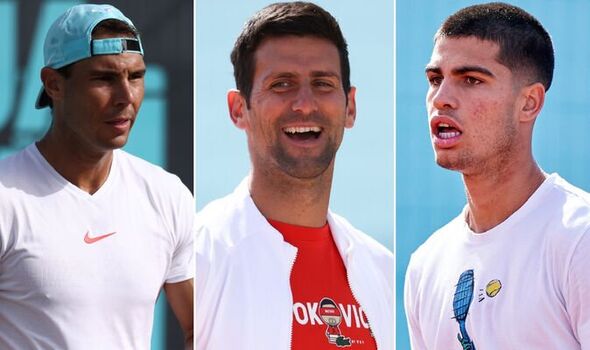 Novak Djokovic has revealed that his son has dumped Rafael Nadal as his favourite player and instead prefers top prospect Carlos Alcaraz. The Serb could face either of the Spaniards at the Madrid Open this week.

Last week, the 18-year-old Alcaraz became the youngest player to break into the top 10 since Nadal in 2005. He has won plenty of plaudits and is widely tipped to become Nadal’s successor.

Djokovic is yet to face the teenager on the ATP tour but they trained together ahead of the Madrid Open. The 20-times Grand Slam champion has quipped that Alcaraz has become his son’s favourite player, toppling Nadal.

The younger Djokovic still copies both players, though, with the 34-year-old saying: “Carlos (Alcaraz) is a great person, I really like him, I have so much respect for him. Today was the first time I have practised with him, even though I’ve seen him on the tour for the past year and his journey has been incredible.

“What he has done for the sport is great, not just for Spain, but it’s great to have someone so young doing so well. He’s a big star already. He’s got the whole package.

“In the last month, for my son, Nadal is no longer number one, Alcaraz is his favourite now. He really likes both. He imitates the way they play, Nadal’s forehand, and the emotion, it’s beautiful.”

Nadal might sympathise with the view of Djokovic’s son having already tipped Alcaraz to become one of the world’s greatest players. The Spaniard, who became the most decorated Grand Slam winner after winning January’s Australian Open, believes his countryman will be the World No 1.

Nadal told Eurosport: “As everybody knows, it’s amazing. He’s a big candidate to win a lot of grand slams and become the number one player in the world.

“What he is doing is fantastic so well done for him and I wish him all the very best. He is doing a lot of things similar to me. He is young, he has the passion and the energy. He has every single thing to become a huge star.

“I’m like a Spanish spectator, personally I’m happy to have someone like him to stay on the tour for a long time and achieve a lot of things.”

Djokovic faces Gael Monfils on Tuesday while Nadal, who believes the Madrid Open will be “tough” due to ongoing injury issues, has received a bye. Alcaraz faces a difficult test against Nikoloz Basilashvili.