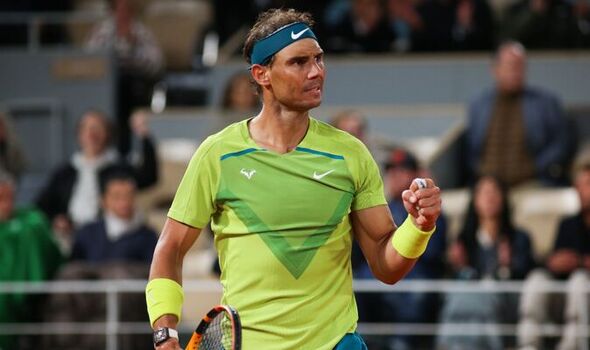 Rafa Nadal has claimed he is not ready to say farewell to the French Open despite his chronic foot injury. The Spanish superstar will bid to celebrate his 36th birthday on Friday by beating Alexander Zverev to reach his 14th French Open final.

The Australian Open champion is unbeaten in Majors since losing the semi-final here to Novak Djokovic last year. But the 21-time Grand Slam winner has dropped hints he is considering his future and said after his quarter-final win: “I’m going to play this tournament but I don’t know what’s going to happen after here.” And the Spanish press have claimed he is set to skip Wimbledon.

But speaking to Spain’s RTVE channel, the world No 5 said: “At no time do I want this to seem like a farewell. We will continue working to find solutions to what is happening down with my foot.

“And I play to be competitive. It’s what makes me really happy. We will keep thinking about the things we need to improve and the desire is to continue.”

Nadal feared he would have to quit last year because of the Muller-Weiss syndrome which has plagued him since 2005. He then missed six weeks after suffering rib fracture in Indian Wells and then claimed there will come a time when “he cannot keep going” after his foot injury flared up again in Rome.

But Nadal, who won a four-hour classic against Djokovic on Tuesday night, trained for an hour yesterday under the eye of his doctor, Ángel Ruiz Cotorro. His coach Carlos Moya joked: “He’s not had his foot amputated!” Nadal’s uncle and former coach Toni added: “I can’t imagine my nephew saying goodbye to tennis. As long as he is competitive, he will continue.”

World No 3 Zverev knocked out teen sensation Carlos Alcaraz and will now seek a first Major win over a member of the ‘Big Four’.

“Next I have the 13-time champion so it’s not really getting easier from here,” he said.

The Olympic champion will reach world No 1 for the first time if he wins the title on Sunday. Otherwise Daniil Medvedev will replace Djokovic in the top spot. And with the points from last year’s French Open dropping off on June 13, the German and the Russian are then guaranteed to occupy the top two places. It will be the first time since November 2003 that at least one member of the Big Four will not be in the top two.

Danish teenager Holger Rune accused Casper Ruud of shouting “Ja!” in his face after the Norwegian won through to face Marin Cilic in the other semi-final today. Rune said: “That’s just a lack of class. He should have had more respect.” But Ruud’s father and coach Christian responded: “It is simply a lie from Holger.”