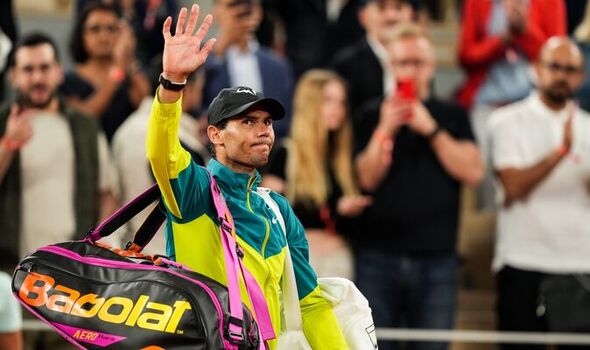 Rafael Nadal has admitted he would pick his health over another French Open title after reaching the final in Paris for the 14th time. The world No 5 advanced to the championship match after Alexander Zverev retired injured in their semi-final though claimed he would rather lose the final and have a “new foot” as his chronic foot injury continues to worsen.

Nadal is back into another French Open final less than three weeks after questioning whether he would recover in time to play the tournament. The world No 5 has been suffering with a chronic foot injury since he was 19 and it has worsened in recent months, forcing him to skip the second half of the 2021 season before plaguing him recently in Rome.

After starting the season by winning three titles and 20 straight matches, the Spaniard picked up a rib injury but was then hit by his Mueller-Weiss syndrome a week after his comeback, limping off the court at the Italian Open following a third-round defeat. But with his doctor joining him in Paris, he has managed to hold up and reach the championship match at Roland Garros.

The 36-year-old will be playing to extend his records to a 14th French Open title and overall 22nd Grand Slam, but has confessed that he would rather lose the final if it meant he could get a “new foot” as he said that his health was more important than a title.

JUST IN: Murray opens up to Foster on his tennis future and retirement fears

During the Spanish portion of his press conference, Nadal was asked what he would pick if a genie came along – to get a new foot but lose Sunday’s final or win a 14th French Open but keep his troublesome foot – the fifth seed chose the former.

“I would prefer to lose Sunday’s final and get a new foot,” he admitted. “I would be happy with my life with a new foot. Win is beautiful, but life is much more important than any title. Especially after the career that I had.”

The 36-year-old has remained realistic about his chronic foot injury during his fortnight in Paris, first admitting his quarter-final clash with Novak Djokovic could be his “final match at Roland Garros.” After winning the match in four sets, Nadal still felt the same way, admitting the foot could end his career at any time.

“I am old enough to not hide things or come here and say something I don’t believe. I have what I have in the foot, so if we aren’t able to find an improvement or a small solution then it’s becoming super difficult,” he said. But after sparking retirement fears, he clarified to Spain’s RTVE channel that he wasn’t trying to hint at the end of his career.

He explained: “At no time do I want this to seem like a farewell. We will continue working to find solutions to what is happening down with my foot. I trust and hope to be able to return. This last year has been difficult. Day to day, with everything that it entails, has been difficult not just because of all the effort but to stay competitive.

“And I play to be competitive. It’s what makes me really happy. We will keep thinking about the things we need to improve and the desire is to continue.”