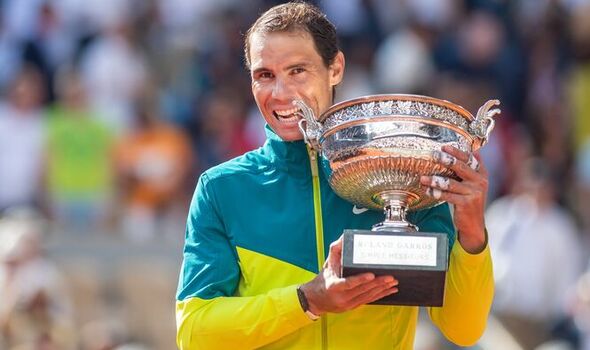 Rafael Nadal has been defended by the World Anti Doping Agency after receiving backlash from a fellow athlete for his use of anaesthesia injections during the French Open. The world No 4 won a record-extending 14th title in Paris and 22nd overall Grand Slam on Sunday and admitted he was forced to numb the nerve in his foot to dull the pain of his chronic injury.

Nadal was something of an unexpected winner at Roland Garros this year despite having won the title 13 times before, as he limped off the court of the Italian Open two weeks before the tournament with his chronic foot injury bothering him once again. But the 36-year-old managed to extend his lead over Novak Djokovic and Roger Federer in the Grand Slam race by winning a 22nd overall Major title and 14th crown in Paris.

After his 6-3 6-3 6-0 final victory over Casper Ruud, the Spaniard admitted he had been forced to play with his foot “asleep” using anaesthesia injections in the nerve to remove the feeling of pain. But  French cyclist Thibaut Pinot appeared to make a dig at the world No 4 for his use of injections, saying: “Today’s heroes…” before following up with: “The methods [used by Nadal] are simply prohibited in my sport, which is unfortunately so decried. Here is a little more precision on the sadness of my tweet.”

Following the backlash, the WADA director has now come out to defend Nadal. Olivier Niggli told Swiss channel RTS that the injections used by the 36-year-old “are not on the list of prohibited products (by AMA), since it is estimated that they do not improve sports performance and that they are not harmful.”

The director of WADA also said that the debate on injections should not come into the doping conversation but could instead be part of a wider discussion on medical ethics, in which one could ask if it is acceptable that an elite athlete has to undergo injections before a match.”

But Niggli was quick to look at Nadal’s history at the French Open, admitting his success 13 times in the past showed his ability to win the title without medical intervention. He added: “Nadal has won 14 titles at Roland Garros, and if he got the previous 13 without the need for those injections, it is likely that the 14th was not thanks to them.”

And the Spanish Society of Sports Medicine has joined Niggli in leaping to Nadal’s defence as they issued a statement saying: “Anaesthetic infiltrations are therapeutic procedures of wide and ancient use, both in the field of sport and in the workplace and in many others.”

However, Nadal has already ruled out using the injections again in the future and has instead undergone a new radiofrequency treatment to try and recreate the same effect for the long-term. If it is successful, he will play at Wimbledon in two weeks’ time.