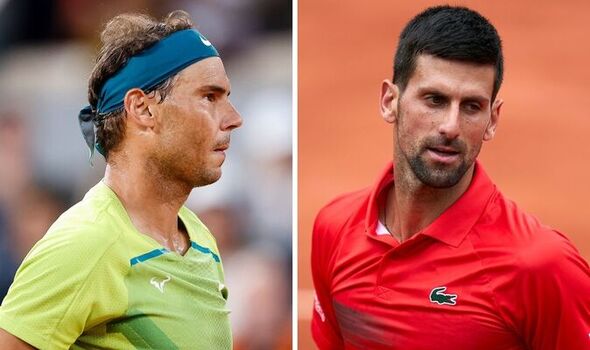 Rafael Nadal and Novak Djokovic are now just one match away from a 59th meeting, and the world No 1 has admitted they will likely be requesting different time slots for their potential quarter-final meeting. If both players can make it to the last-eight at the French Open, it will be their first clash since the top seed upset the 13-time champion in last year’s semi-final.

Nadal and Djokovic are on a collision course after ending up in the same section of the French Open draw. With the two former champions in Paris in the top quarter, they could meet in a mouthwatering quarter-final, a rematch of their semi-final on the same stage 12 months ago.

But with night sessions on the tournament’s main stadium, court Philippe-Chatrier – a new feature for 2022 -, one man will be left short-changed after last year’s champion admitted they would be requesting different times for the match. Nadal notoriously does not enjoy playing on the clay at night, something he reiterated on Monday, while Djokovic prefers the conditions of the night session.

Appearing on French television after his three-set victory over Aljaz Bedene on Friday, the world No 1 said: “All I will say is Rafa and I would make different requests.” Meanwhile the man dubbed the ‘King of Clay’ shared his dislike for the new night session conditions after he earned his own straight-sets win over Botic van de Zandschulp.

“I don’t like night sessions on clay. I say the other day. I am very clear with that,” the world No 5 said when asked about the chances of playing at night again, after he was given the night session slot in his second round match.

But Nadal will first need to survive a meeting with his former coach and uncle Toni’s new charge Felix Auger-Aliassime in Sunday’s fourth round, while Djokovic will face Diego Schwartzman for the seventh time in the round-of-16.

Both players have remained coy on their potential quarter-final but have been tearing through the draw so far, with Nadal and Djokovic yet to drop a set. They are also in the same half as Carlos Alcaraz and Alexander Zverev, though both men were forced to save match points in their own respective five-set battles in Wednesday’s second round.