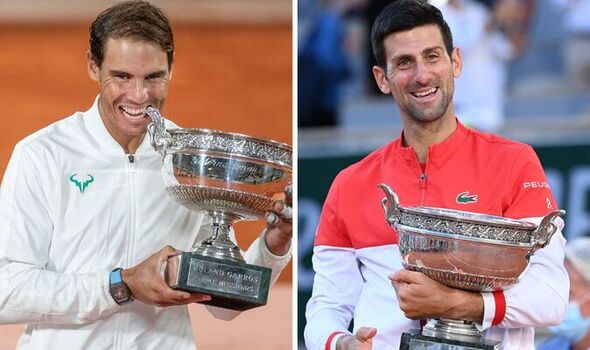 Rafael Nadal or Novak Djokovic could end up walking away from the French Open worse off than previous years despite a big boost in the tournament’s overall prize money. Compared to the last pre-pandemic edition of the Grand Slam, the overall pot has increased by almost seven percent but the champion will be losing out with a decrease on 2019’s winner’s cheque.

The French Federation of Tennis announced on Wednesday that £37 million (€43.6 million) would be on offer across the French Open this year – up 6.8 percent from 2019, the last time the tournament was played with ‘normal’ pre-pandemic capacity. But the winner will be receiving £85,000 (€100,000) less than they did three years ago.

While this year’s champion will be receiving less than they did in the last ‘normal’ edition of the clay-court Major, players in the earlier rounds will be banking bigger cheques this time around. Three years ago, a first-round loser pocketed £39,000 (€46,000) but will take home £53,000 (€62,000) this time around.

Announcing the boost in the overall prize pot, the FFT said: “The increase in prize money for the first round of the singles main draws and the qualifying competitions is designed to help the players who have suffered the most as a result of the Covid-19 pandemic,” referring to those ranked at lower levels.

The French Open begins on May 22, with Djokovic hoping to defend his title from last year and equal Nadal’s all-time record of 21 Major titles, while Barbora Krejcikova is the defending champion on the women’s side. There is also some more good news for players, who will be able to stay in their accommodation of choice for the first time in three years, after designated player hotels were required in 2020 and 2021.