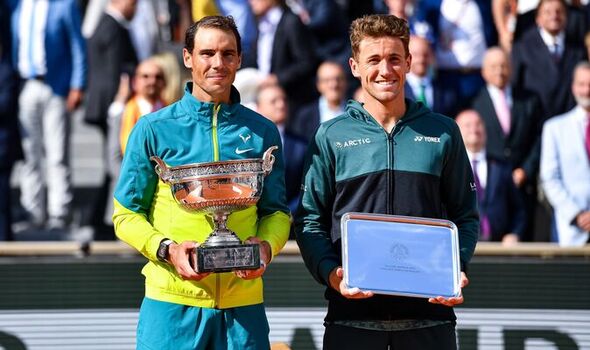 Casper Ruud opened up on the “impossible” task of facing Rafael Nadal in the French Open final and revealed that both Nadal and his uncle Toni reached out to him following his 6-3 6-3 6-0 defeat to the Spaniard in what was the 23-year-old’s first Grand Slam final.

Ruud reached his maiden Major final at the recent French Open but came up against 13-time former champion Nadal, who dropped just six games to the Norwegian en route to a record-extending 14th title in Paris and 22nd overall Grand Slam. The world No 5 is now playing his first tournament since losing the final and has revealed that the Nadal family reached out to him after the match.

The 23-year-old is one of the players who came through the Rafa Nadal Academy in Mallorca, where Nadal’s uncle and former coach Toni is the director, and said that both the 36-year-old and his uncle Toni spoke to him following the final. “They both sort of reached out,” he explained.

“Toni reached out to me and my father after the final and Rafa of course I talked to after the final and I met him the day after as well actually in the airport so we were chatting a little bit.” And Ruud admitted he now knew it was “impossible” to play Nadal on his most successful court after attempting to do something no player had done before – beat him in a French Open final.

JUST IN: Andy Murray OUT of Queen’s with injury as Brit shares Wimbledon hope

He continued: “On [court] Philippe-Chatrier it’s impossible to beat him because in the final there’s no one who has done it before so I was going into the match hoping, you know, he’s gotten older but obviously he’s still playing phenomenal.”

Now sitting at a career-high of world No 5 ahead of his debut at the Queen’s Club, Ruud said he still went into the championship match with the belief he could beat Nadal, claiming there had to be a moment his streak in French Open finals came to an end. “Like any other finalist who has played they probably tried to think that one time has to be the time where someone beats him,” he laughed.

“But he’s keeping his record alive and perfect.” It was a baptism of fire for Ruud as his first meeting with Nadal came at the world No 4’s most successful tournament, and he admitted that it was much more difficult to face the Spaniard on a tennis court than the golf course, having now faced him in both sports.

“I think he’s tougher to beat in tennis,” he admitted. “It’s more difficult.”