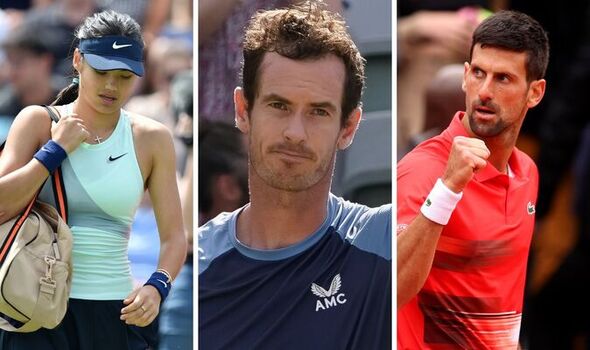 The grass court season kicked off this week, seeing the return of last year’s Wimbledon runner-up Matteo Berrettini following an operation in March. He defeated Andy Murray to win the Boss Open in what was a successful tournament for the Brit, as he ended a six-year wait for two big milestones.

There was also success for the Brits playing on their home turf, as Dan Evans won the Nottingham challenger while the likes of Harriet Dart, Ryan Peniston and Lily Miyazaki also enjoyed success at the Rothesay Open. But it was a different story for Emma Raducanu who suffered a new injury to derail her Wimbledon preparations.

Russian and Belarusian players who are banned from competing at Wimbledon this year also showed off their ability on the grass despite being unable to play in the UK, making finals and winning titles elsewhere.

Meanwhile, Novak Djokovic’s ranking has taken a hit following his quarter-final loss at the French Open, with his points for the 2021 title officially coming off. The Serb has fallen to world No 3 and will see his ranking further affected when the ATP remove all points from last year’s Wimbledon as part of their sanction on the tournament. It also means the end of an 18-year reign for the ‘Big Three’ in the world’s top two.

Express Sport takes a look at the biggest stories on and off the court this week.

Andy Murray ended a six-year wait for two big milestones at last week’s Boss Open in Stuttgart. The three-time Grand Slam champion beat top seed Stefanos Tsitsipas en route to the final – his first top 5 win since beating Novak Djokovic at the ATP Finals in 2016, and his first singles final on the grass since winning Wimbledon earlier that year.

The 35-year-old’s impressive run also included a win over Nick Kyrgios – who alleged he was subject to racist verbal attacks from the spectators during the match – before taking a set off Matteo Berrettini in the final. But the championship match didn’t end how Murray would have liked as he started suffering with an abdominal injury late in the final set, telling his team: “From the back it’s fine but there’s no chance I can serve properly. That’s what happens when you have those big breaks.”

Murray is now back inside the top 50 for the first time in four years at world No 47. The Boss Open would have guaranteed him a seeded spot at Wimbledon but he can still push on to boost his ranking at this week’s cinch Championships if he is able to play after his injury scare in the Stuttgart final.

Raducanu suffers another injury in homecoming with Wimbledon looming

Emma Raducanu returned to the Nottingham Open last week, 12 months after making her WTA Tour debut at the event as a wildcard, where she lost in the first round to Harriet Dart. She was back to play her first professional match on home soil, this time as the British No 1 and US Open champion, but her homecoming lasted just 33 minutes and seven games as she was forced to retire 3-4 down to Viktorija Golubic.

The 19-year-old had suffered a sudden side injury as early as the first point of the match and received three rounds of treatment before retiring from the match. She has since pulled out of this week’s Rothesay Classic in Birmingham but expects to be back in time for Eastbourne and Wimbledon.

“I definitely tried to get through it. But, in the second game, I called the physio on and, the first changeover, she was trying to do some work. But, from there, even she was like, ‘This is going to be really difficult for you to continue’,” Raducanu said after the match.

Novak Djokovic has dropped outside of the world’s top two for the first time since October 14 2018 following his French Open quarter-final loss to Rafael Nadal. With his 2,000 ranking points from winning the tournament last year coming off, Daniil Medvedev has returned to the world No 1 spot following a two week stint at the top earlier this year.

Alexander Zverev has also reached a career-high of world No 2 despite crashing out of the French Open with an injury he picked up in his semi-final, marking the first time since November 10, 2003 that none of the ‘Big Three’ are inside the world’s top two, ending a reign of more than 18 years. And Djokovic’s ranking will only suffer further when his 2,000 points for winning Wimbledon last year will be removed as the ATP have stripped the tournament of all ranking points in 2022 as a sanction for the ban on Russian and Belarusian players.

It was a successful week for the rest of the Brits at the Rothesay Open in Nottingham despite Raducanu’s latest injury scare. Dan Evans won the Challenger title there for the second time while Ryan Peniston broke new ground by reaching the quarter-finals. On the women’s side at the WTA 250 event, Harriet Dart reacher her first quarter-final while Lily Miyazaki came through qualifying to score her first WTA Tour-level win.

Meanwhile, the Russians and Belarusians who have been banned from Wimbledon and all British grass-court events proved their ability on the surface elsewhere this week. In ‘s-Hertogenbosch, Medvedev made the final where he lost to breakout sensation Tim van Rijthoven, who had never won a tour-level match before last week before beating two top 10 players en route to his first title. Russia’s Ekaterina Alexandrova won the women’s title at the event, beating Belarus’ Aryna Sabalenka in the final.