She was once described in the People’s Daily, the main newspaper of China’s Communist Party, as “our Chinese princess”. At the time, in 2013, Peng Shuai was at the peak of her tennis career, having won five doubles titles that year, including Wimbledon, where she teamed up with her childhood friend Hsieh Su-wei to defeat the Aussie pair Ash Barty and Casey Dellacqua.

While never widely known outside China, having struggled as a singles player, Peng has attracted global attention since she disappeared this month after posting sexual assault allegations against a 75-year-old former senior Chinese Communist Party official. 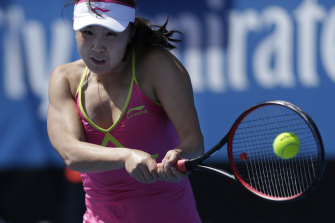 To her more than 500,000 followers on Weibo, China’s version of Twitter, Peng described an assault three years ago that began an on-and-off consensual relationship with Zhang Gaoli, who from 2013 to 2018 served on the party’s Politburo Standing Committee, the top ruling body in China.

In the 1600-word post, she said that “even if it’s like striking a stone with an egg, and courting self-destruction like a moth to the flame, I will tell the truth about you”. In about 20 minutes, the post vanished, and then so did she.

Inside China, censorship has shut down any opportunity to discuss the issue, while outside a growing chorus of tennis stars and officials, along with the United Nations and the British and American governments, are calling for proof that Peng is safe and well. World No.1 Novak Djokovic and Serena Williams described her disappearance as “shocking”, and Naomi Osaka tweeted that she was “in shock of the current situation” and “sending love and light her way”.

In a bid to quell the growing storm, last Thursday China’s state media posted a statement claiming to be from Peng, in which she purportedly said she was resting at home and that “I am not missing, nor am I unsafe”.

The Women’s Tennis Association was having none of it. Chairman and CEO Steve Simon slammed the statement, saying: “I have a hard time believing that Peng Shuai actually wrote the email”. He said the statement “only raises my concerns as to her safety and whereabouts”.

In further attempts to prove her wellbeing, two questionable videos of her at a restaurant with her coach and family were released by China’s state-run media and then photographs of Peng were posted on Twitter by a Chinese reporter. Video was also posted of her apparently at a tennis tournament on Sunday. All this has done little to cast any real light on what has happened to her. There are still grave concerns for her safety while it cannot be independently verified she is OK.

The pressure is building on China, which is hosting the Winter Olympics in just a matter of weeks. The WTA has threatened to pull all of its tournaments out of China if it is not satisfied Peng is safe and, with the United Nations, has demanded a full investigation.

Unsurprisingly, the only sporting group that has failed to stand up to Beijing is the International Olympic Committee. After last Thursday’s supposed statement from Peng, a three-time Olympian, the best the IOC could muster was a statement that “experience shows that quiet diplomacy offers the best opportunity to find a solution for questions of such nature”.

In publishing her allegations against one of the most powerful men in China, Peng has shown herself to be extremely courageous. She deserves the full backing of the international community, including the Australian government and Tennis Australia.

If China is to have any credibility in hosting one of the most celebrated global sporting events, it has to do better than offer up a litany of clearly dubious statements, pictures and videos endeavouring to prove Peng’s wellbeing. The voices of concern must stay strong and loud until Peng is indisputably shown to be free from danger.