South Australian police officers were forced to move Nick Kyrgios and his girlfriend into separate hotel quarantine rooms after the pair were involved in a heated verbal exchange.

After months on the road together, Kyrgios and girlfriend Chiara Passari returned to Australia after the world No.97 competed in the Laver Cup at Boston’s TD Garden. 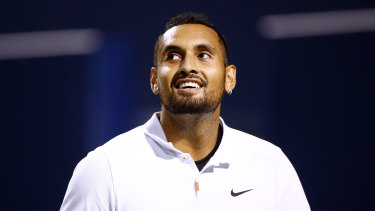 Nick Kyrgios and Chiara Passari have had a rocky relationship since getting together last year.Credit:Getty

But in hotel quarantine in Adelaide on Thursday, the pair engaged in a verbal clash which led to police being called.

“In the afternoon of Thursday 7 October 2021, police were alerted to a verbal argument between two occupants within a Medi-hotel,” SA Police said in a statement.

“An investigation was conducted, no offences were disclosed and both parties will now spend the remainder of their quarantine in separate rooms.”

Kyrgios and Passari have had a rocky relationship since getting together last year and this isn’t the first time the pair have been involved in a public feud. Before the 2021 Australian Open, Passari expressed anger at Kyrgios on Instagram.

Kyrgios then deleted a number of photos with Passari from his Instagram profile.

Passari was a constant theme through Kyrgios’ Australian Open press conferences, and he wrote her name on a camera following a win at Melbourne Park.

After relatively successful runs at the Australian Open and Wimbledon, Kyrgios’ form has floundered.

He won his first match after Wimbledon in July – against South African Kevin Anderson – but has dropped every singles clash he has played since. Five consecutive defeats has seen his ranking slip to 97th in the world.

He returned home after the Laver Cup and will take the rest of the year off to recuperate from a knee injury.

He plans to make his return to the court at the Australian Open.