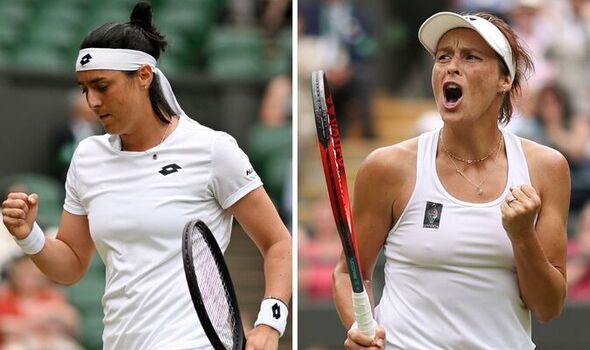 The semi-final lineup has been decided for the bottom half of the women’s draw at Wimbledon, with Ons Jabeur and Tatjana Maria breaking new ground by making their first-ever last-four appearances at a Grand Slam. Mother-of-two Maria battled back to beat compatriot Jule Niemeier 4-6 6-2 7-5 in an all-German final before third seed Jabeur defeated Marie Bouzkova in another comeback victory 3-6 6-1 6-2.

Maria and Niemeier were first up on Court 1 in an all-German clash of two surprise quarter-finalists. Maria had never reached the second week of a Major and was still on the comeback from the birth of her second child last year, while Niemeier was playing just her second-ever Grand Slam main draw after qualifying for the recent French Open.

It was the 22-year-old who took the first set as she broke in the opening game and continued to hold for a 6-4 lead before breaking in the opening game of the second to put herself within touching distance of a maiden Grand Slam semi-final. But she won just one more game in the second as the world No 103 broke three times to take it 6-2 and force a decider.

The Wimbledon debutant pounced first in the third set, breaking for a 3-2 lead following a series of unforced errors from her opponent and coming through a tight service game to back it up for 4-2. But she dropped the next three games as the 34-year-old broke back and took a 5-4 lead. Niemeier was unable to capitalise on a break point at 5-5 to serve for the match and paid the price as Maria broke to win 4-6 6-2 7-5 in two hours and 18 minutes before the pair embraced at the net.

JUST IN: Novak Djokovic gave himself a ‘pep talk in the mirror’ before comeback 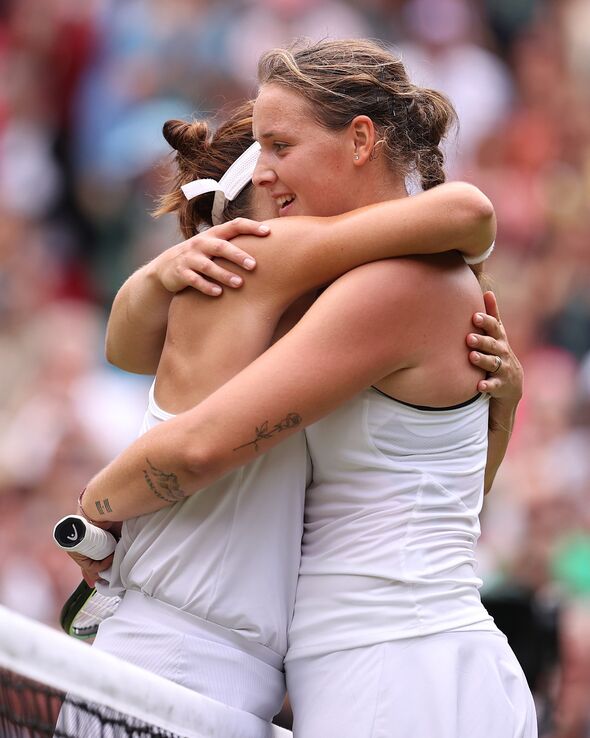 It meant the elder German booked her place in a maiden Grand Slam semi-final at the age of 34, just 15 months after giving birth to her second daughter. “I have goosebumps everywhere,” Maria said in an emotional on-court interview. “It was such a tough match against Jule, she is from my country Germany. I think today we made Germany really proud after our match.” Touching on her journey back from childbirth, she added: “It’s a dream to live this with my family, with my two little girls. One year ago I just gave birth almost. It’s crazy.”

And her opponent in Thursday’s women’s semi-final day will be Jabeur after she beat Bouzkova on Centre Court as she followed in the footsteps of Novak Djokovic in the previous mtch, as he completed a five-set comeback in the men’s quarters. It was the third seed who was broken first, saving the first break point with a drop shot at the end of a thrilling exchange before finding herself 2-3 down. The Tunisian had a chance to break back at 3-4 but failed to convert either of her break points, instead finding herself serving to say in the first set.

Having led 40-0, Jabeur threw in a double fault and two errors to get broken and gift the world No 66 the first set 6-3 after 43 minutes. But she didn’t let that bother her at the start of the second set as she opened with a break of the Bouzkova serve, earning a huge applause from the crowd. After failing to convert another break point in the Czech’s next service game, Jabeur won four in a row to take the second 6-1 and attempt to follow Maria into the semi-finals with her own comeback victory. 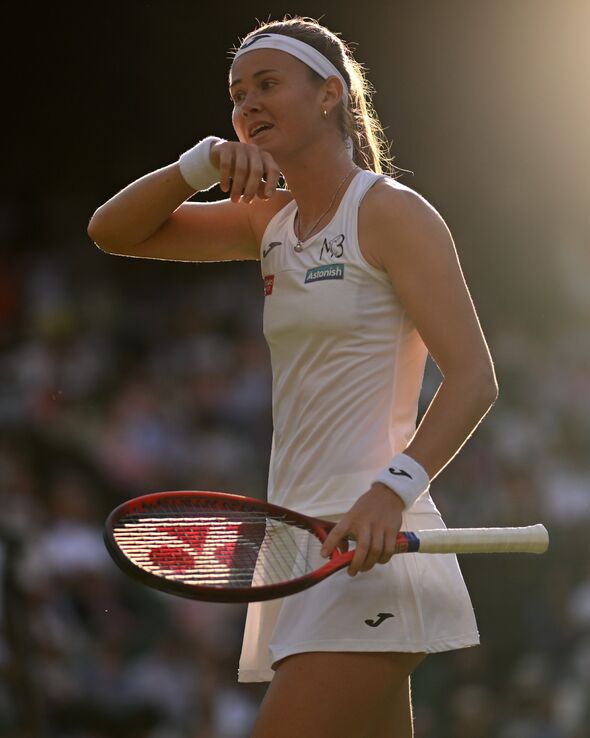 It was a fifth game in a row for the 27-year-old as she held to open the third, and Bouzkova suddenly found herself facing yet another break point fom 40-0 up, losing five points in a row to gift Jabeur her sixth successive game for a moral bagel and an early lead in the decider. The Tunisian kept her streak up, breaking again for a 4-0 lead – her eighth game in a row.

But the 23-year-old fought back to break and get herself on the board at 1-4. Jabeur refused to allow her opponent any momentum, breaking straight back to serve for a maiden Grand Slam semi-final, booking her spot in the last-four with a 3-6 6-1 6-2 victory in an hour and X minutes.

Jabeur and Maria will face off in Thursday’s semi-final. Tomorrow, Simona Halep and Amanda Anisimova will face off on Centre Court for the chance to join them in the last-four, while Elena Rybakina and Ajla Tomljanovic will also be vying to book a place in the semis.