Just how cranky are Australians right now? A human lightning rod by the name of Novak Djokovic is about to find out.

I’ve seen many grand and dramatic moments inside Rod Laver Arena over the years. Back in the early days I saw Frank Sinatra sing My Way there at his final Australian concert. I saw Pavarotti sing Nessun Dorma; we were sitting high up behind the stage, so it was like watching a refrigerator gesticulating in the distance, but it was memorable nonetheless. And more recently I was courtside when Roger Federer won his 20th grand slam title in 2018. All unforgettable.

But I doubt any of those will compare for drama to the moment, likely to happen on the first night of the Australian Open in 12 days time, when Djokovic takes to the court in pursuit of his 10th title in Melbourne and a record-breaking 21st major title.

I’ll be in the stands, and like most other people it will be difficult to hold my tongue.

Expect boos — long, loud and sustained in their disgust — from those who just have to let fly with their frustration and fury.

Am I here to advocate booing?

Call me old-fashioned, but no.

Do I understand the impulse?

Djokovic has never been a crowd favourite, in Melbourne or anywhere else, and he has sometimes worn that lack of popularity with a lack of grace that has exacerbated the problem.

It hasn’t helped that he has shared the tennis spotlight with the game’s two secular saints, Roger Federer and Rafael Nadal, with whom he also shares that 20-title grand slam record. But that garden variety lack of public affection has morphed into something else over the months of will-he-won’t-he speculation about his Australian Open participation and vaccination status.

This all came to a head on Tuesday night, when the Serbian revealed on social media that he was en route to Melbourne. His announcement came with a warm-and-fuzzy declaration of love and respect for “all things on this wonderful planet” and a celebration of the “fantastic quality time” he had spent with his family over Christmas and new year. Then the kicker: “I’m heading down under with an exemption permission.”

In Australia, the Instagram post – complete with a photo of a smiling Djokovic next to his luggage trolley at an airport – went down like a fart in a lift, or a maskless cough in a lift to adapt the analogy for pandemic times. Take my word for it: delicate eyes should not search social media for any combination of Novak’s name and the F word. On Tuesday night and into Wednesday, countless thousands had to convince autocorrect that they were not telling the tennis star to duck off.

Here are two concise examples of the genre, from Twitter.

From The Chaser: “Victorian government successfully brings a splintered country together to tell Novak Djokovic to f— off.”

And this one: “Unless he’s bringing 22 million RATs with him, he can f— off back to Serbia.”

There were not many polite takes, and virtually none in support of the medical ruling in Djokovic’s favour.

We are told, by both Tennis Australia and the Victorian Government, that the process of granting the waiver was independent and done blindly; that is, the independent panel of medical experts ruling on tennis-related exemptions was not told the identity of the people they were assessing.

Nothing to see here, folks. 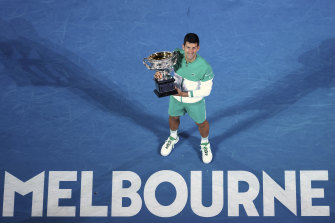 Good luck selling that to a sceptical and weary public reeling from two long years of lockdowns and the upheaval wrought by another unwelcome arrival, Omicron. In contrast to Djokovic’s lovely family holiday, Australians welcomed 2022 in a blizzard of fury and fear as a fresh COVID wave swamped hospitals and ordinary folk took part in a frustrating search for at-home test kits and vaccine boosters.

There is no getting around what are known in the image business as bad optics.

Here is an extraordinarily wealthy athlete – he earned more than $A12 million in 2021, for a career prize money pot north of $A200 million, before counting his sponsor dollars – waltzing into the country at the last minute armed with a government-approved waiver that appears custom-designed to cause maximum public revulsion. And to add insult to injury, the reasons for that decision are secret. We’ve been told a bit about the How – about the process involved – but nothing at all about the What and the Why.

Many will be digesting this news in endless COVID testing queues, or perhaps in their sickbeds, or on the couch in isolation. Some will be well enough to find their way to Melbourne Park in a couple of weeks, and the scenes will not be pretty.

And if you’re wondering what Djokovic might do to make amends, I’d suggest he can’t. The good ship Redemption sailed with the exemption, and there is no sign the sport’s leading woe-is-me prima donna has it in him to perform the sackcloth-and-ashes aria this moment demands.

Who could? Great as he was, not even Pavarotti himself could hit that note.

Fascinating answers to perplexing questions delivered to your inbox every week. Sign up to get our new Explainer newsletter here.