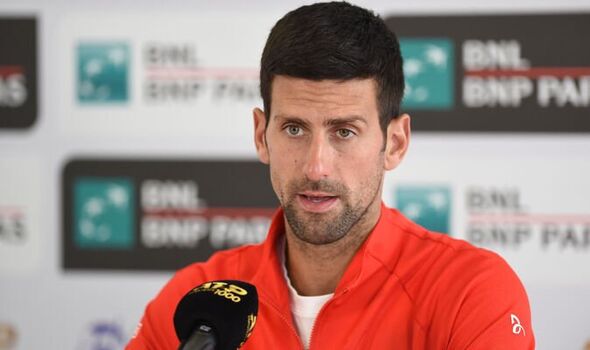 Novak Djokovic has conceded that he has mostly practised with right-handed players ahead of the French Open and might need a late change to his preparation after drawing Yoshihito Nishioka. The world no.1 will begin his defence of the title at Roland Garros against the left-handed hitter.

The French is Djokovic’s first Grand Slam of the year having been barred from the Australian Open over his vaccination status. Despite winning the Rome Masters on clay last weekend, it is not yet clear how the Serb’s form will translate into the majors.

Djokovic has attempted to prepare as best as possible but has admitted that his pre-tournament practise has mostly been with right-handed hitting partners. That could present a problem when he faces the left-handed Nishioka.

“I had a look at the draw. I think every player always looks at the entire draw and studies it in a way,” Djokovic said ahead of his first-round clash with the world no.94.

“You can only focus on your next challenge and match… It’s a very tough top half of the men’s draw, but there is something that you can’t really affect… I have trained mostly with right-handed players and I’m playing with a lefty, so it is difficult.”

Djokovic – who will turn 35 on the first day of the French Open – has been placed in the same side of the draw as rival Rafael Nadal. His most likely final opponent is Daniil Medvedev, who starts in the second half of the draw against Facundo Bagnis.

The 20-times Grand Slam champion believes he is in good shape to win at Roland Garros. He continued: “I feel I am always in that contention to fight for any Grand Slam trophy. I believe in my own abilities to get far and to fight for one of the most prestigious trophies.

“As a defending champion, of course, more so, to believe I can do it again. Reliving the memories from last year is something that obviously gives me goosebumps and motivation to try to replicate that.

“Historically it always has required some time and several tournaments to really feel comfortable playing on clay. Rarely did I feel my best on clay in the first or second tournament in the season. So that was the case this season again.

“It took me two tournaments to really feel that I’m getting closer to [my] desired level. I reached that level in Rome.”