Shortly after every win, Novak Djokovic performs a grand gesture of “throwing his heart” to the crowds who have just experienced his brilliance between the baselines.

Djokovic’s celebration has become routine. After shaking hands, the Serbian drops his bags and returns to the mid-section of stadium courts around the world to accept his applause. 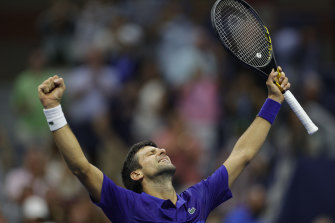 Novak Djokovic has been given an exemption to play in Melbourne.Credit:Getty Images

In appreciation, he turns to all four corners of the stadium, bowing and then thrusting his hands rapidly outwards from his chest towards his subjects in triumph. With a winning record of almost 90 per cent over the past two seasons, it is a surprise the Serbian has not developed a severe case of repetitive stress syndrome in the shoulders.

But because of recent controversies, punctuated by a medical exemption allowing him to play the Australian Open, it would be a brave act for the world No.1 to deliver it this month.

Based on the current mood in Melbourne, many of those in attendance might feel compelled to reciprocate by throwing “the bird” straight back at him on Rod Laver Arena.

While sharing the love is usually unifying, this show of emotion from the nine-time Australian Open champion is far from universally embraced. 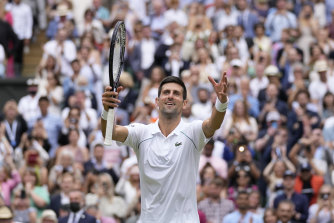 Sharing the love: Djokovic celebrates with the crowd after his Wimbledon win last year.Credit:AP

Cynics instead find Djokovic’s declaration of gratitude towards the crowd cringeworthy and somewhat less than sincere.

It is another example of the polarising prism through which the 20-time major winner is viewed.

Djokovic’s dominance of tennis over the past decade has reset the sport’s landscape as he reeled in Roger Federer and Rafael Nadal, adversaries who are widely beloved and rarely drawn into controversy.

The tale of a young boy who dreamt of winning Wimbledon as the bombs dropped around him in Belgrade, and years later delivering on that ambition and far more, is truly remarkable. It is an inspirational story. Djokovic at his best is someone to be celebrated.

He is blessed with a passionate, partisan and large band of fans who are fervent in their support of a champion with strong claims to being the greatest man to grace the court.

To watch the Serbian stretch every sinew to return a tennis ball, somehow managing to slide on a hard court, before reverting to form with a snap like a rubber-band, is to witness the most extraordinary of athletes.

But there has never been anything rubbery about the reactions to him, dating back to when he first emerged as a serious title threat to Federer and Nadal in 2007.

The 34-year-old, who won his first Australian Open the following year, is considered the King of Melbourne Park.

Whether fans will feel beholden to treat the 20-time major winner with benevolence during the 2022 Australian Open is doubtful despite his sustained success here.

The anxiety has been building for weeks. As Australian Open deadlines ticked by with no declaration from Djokovic as to his intentions, missteps of recent seasons were amplified.

Even as he has matured into a marvel on the court and a fledgling union leader off it, all the while balancing his family duties, moments of mayhem have blighted his reputation.

He was bounced out of the 2020 US Open for hitting a lineswoman with a tennis ball. A tantrum in Tokyo during the Olympics last year was ill-advised given the stage and setting. Both those acts were confined to the court.

It is the more serious issues that have occurred away from the stadiums, sometimes despite his best intentions, that have inflamed opinion against the six-time Wimbledon winner.

In the infancy of the pandemic, Djokovic and his wife Jelena donated millions and also equipment to hospitals in Serbia. His benevolent streak is well-received at home.

But then the dual French Open champion hosted the ill-fated Adria Tour as the first wave of the pandemic hit Europe.

It was devised as a charity fundraiser but instead became a COVID-19 super-spreader event at a time when so much was unknown and no vaccines were in place.

His ambiguity regarding vaccines at a time of crisis for the world, and his refusal to shed light on his status as the deadline for the Australian Open crept closer, raised passions.

Last February, the longest-standing No.1 in history sent a list of requests to Australian Open tournament director Craig Tiley regarding the treatment of players in quarantine.

Even though they were of no specific benefit to him, given he was quarantining in relative luxury, it provoked tension at a time when some wondered whether the tournament should be going ahead at all.

It should be noted Djokovic could not grant an Australian Open exemption to himself. Nor are the reasons for the Serbian being an exception known.

But the exemption does not validate his stance or behaviour, nor lessen the vehemence of his critics.

Sins of the past, even those stemming from good intent, are hard to ignore. And Victorians are not in a particularly forgiving mood at the moment.

Djokovic has proven in the past more than capable of succeeding against the odds and in spite of popular opinion.

The world No.1 will need to harness every bit of that resilience as he chases history in this Australian Open.