Home » Tennis » Novak Djokovic: Most players do not want to continue season with multiple quarantine periods

Novak Djokovic claims a majority of tennis players do not want to continue with the season if it means going through multiple periods of quarantine.

The world number one has reached the semi-finals of the Australian Open despite an abdominal injury and is not the only player to have experienced physical problems following the 14-day quarantine period.

Many European countries now have significant restrictions on travel and Djokovic, who set up a separate player body to the ATP last year, has called for urgent discussions.

After beating Alexander Zverev 6-7 (6) 6-2 6-4 7-6 (6), Djokovic said: “I don’t want to sit here, complain about what we have been through, but we have to be honest and realistic that it has an effect on the physical well-being of players. Of course also mental, emotional, but physically, I mean, this is not normal.

“We are hoping that it’s temporary. But, talking to a lot of players, the majority of the players just don’t want to go ahead with the season if we are going to have to quarantine most of the tournaments. 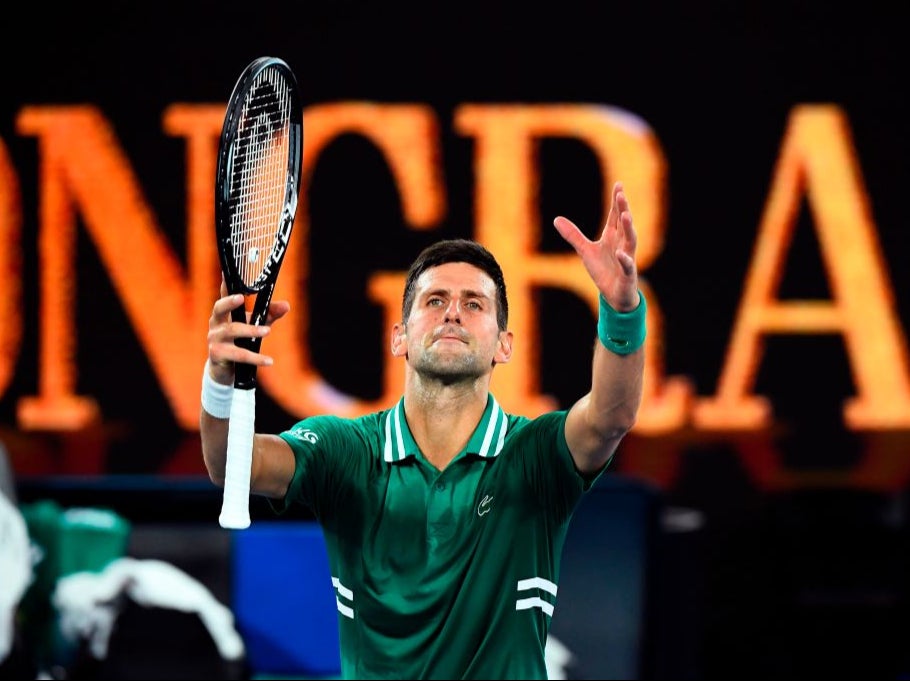 “So this is something that should be discussed, like as of now. I spoke to some of the (ATP player) council members, and they are saying they have extensive discussions about that with ATP management.

“I’m waiting for some answers. I want to understand how our continuation of the season post-Australia is going to look like, because this definitely is not good for players in terms of their well-being.

“For the lower-ranked players, I have heard a lot of complaints. I’m not pointing fingers at anybody. It’s just I’m speaking what is going on, speaking the truth, am speaking the reality, and we have to talk about it.”

Multiple tournaments have been held at Melbourne Park over the past three weeks, and Djokovic voiced the idea of an NBA-style bubble, where all events take place at the same venue.

He said: “I heard some players talk about that, and I don’t mind to discuss about that kind of idea. Select one place and we play all the tournaments on that surface and that place.

“But we just have to discuss options because I don’t know honestly if this is going to work. We also have to be realistic that what we are experiencing here in Australia is far better than what most of Europe is going through in terms of restrictions and rules and regulations and quarantines, etc.

“I have been hearing that there are some countries that don’t want to accept people coming in from some specific countries because of the virus strains, different virus strains, so forth, and transmission, and God knows what.

“I don’t know how we’re going to handle that, honestly. But we have to address this very quickly because the season has already started.”

Zverev backed up Djokovic’s words, saying: “I do agree that we can’t have a travelling circuit right now. It’s just as simple as that.

“Injuries will keep on happening. There is restrictions to countries. Depends on what passport you have. You might not even be able to go to some of the countries. I know South American players will be struggling a lot.

“I think what the ATP should do and should look into is maybe having a venue like here and play multiple weeks at one place. Because at the end of the day in Europe right now we can’t have spectators anyway, so what difference does it really make where we play the tournament?”

Next week ATP tournaments are set to take place in Singapore, Argentina and France.