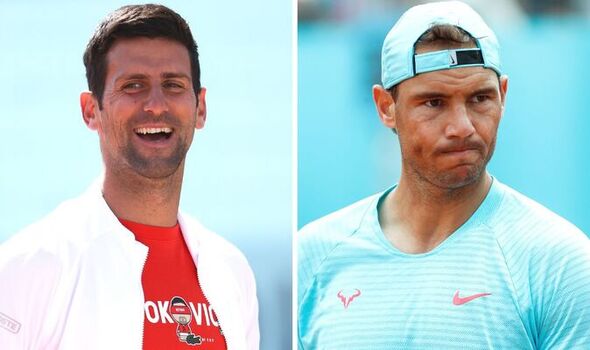 Novak Djokovic has been backed to be “ready” for his French Open title defence, days after Rafael Nadal was warned that the Serb would be a “beast” in Paris. The world No 1 is playing just his fourth tournament of the year in Madrid and is still looking for his top form but his ex-coach believes he will be back to his best by the end of the month.

Djokovic had a slow start to the year when he was unable to play the Australian Open, Indian Wells and Miami, going 2-2 in his first tournaments of the year in Dubai and Madrid. He then reached the final of the Serbia Open and is now hoping to build on his momentum at the Madrid Masters, with his French Open title defence looming.

And the 34-year-old has received a boost in his quest to find his best level in time for his first Grand Slam tournament of the season, as his former coach of 15 years said Djokovic looked set to be ready in time for the Parisian clay-court Major. “He was not in great shape because of the problems from the beginning of year,” Marian Vajda said of his former charge during a press conference in Bratislava on Tuesday.

“He doesn’t have enough matches under his belt, and that is why he is now trying to play everywhere he can. He is getting back to his old self, even though in Belgrade final he still wasn’t in best shape. He might be struggling a bit in Madrid and Rome, but I think he will be ready for Roland Garros”.

JUST IN: Nadal request made at Madrid Open due to Real Madrid vs Man City

Vajda’s assessment of the world No 1 comes as fellow pro Christopher Eubanks warned Nadal and the other French Open contenders that Djokovic will be a “beast” by the time the tournament begins at the end of the month. “It seems to me that he played better and better from match to match and that this is a positive signal in front of Roland Garros,” the world No 155 told Tennis Channel, speaking about Djokovic’s run at the Serbia Open.

“If he continues like this, he will really be a beast in Paris. Then everyone will be afraid of him, it will be the real Novak.” The American also added: “I think Novak is finding his form and if he continues this, he’s going to be really, really scary in the next few weeks.”

Djokovic himself also thought things were going in the right direction ahead of the French Open after reaching the final of the Serbia Open. “Things are progressing slowly but surely, Paris is the big goal and hopefully by Paris I’ll be ready,” he said after losing the championship match to Andrey Rublev.

Nadal himself will be looking to pick up some momentum after being sidelined for six weeks with a rib injury. The world No 4 started the year on a 20 match-winning streak, picking up titles in Melbourne, Acapulco and a record 21st Major at the Australian Open, but suffered a stress fracture in the Indian Wells semi-final and lost the final the following day. He will now face Miomir Kecmanovic in his first match since March 20 when he takes to the court on Wednesday afternoon