Novak Djokovic warned he is back to full fitness after he ended Aslan Karatsev’s fairytale run to reach his ninth Australian Open final. And the world No.1 reckons he is going to face another Russian Daniil Medvedev on Sunday.

The Serb, who suffered an abdominal injury in the third round, beat qualifier Karetsev 6-3 6-4 6-2.

And Djokovic said: “This is the best I have felt in the entire tournament. I felt great. I could swing through the ball. No pain. Just best match so far. Came at the right time. I am thrilled to feel this way.

“I have two days now. I don’t know – I will see, I will talk to the team and evaluate. I will definitely train in one of the next two days. Probably more likely the one closer to the finals on Saturday. 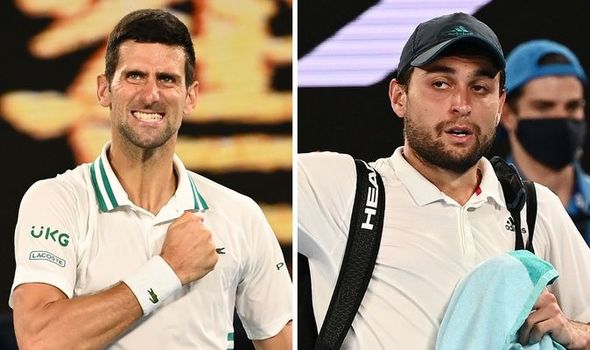 Medvedev, who is on a 19-match winning run, will face Stefanos Tsitsipas in the other semi tomorrow.

Djokovic said he watched the end of the Greek’s stunning comeback win over Rafa Nadal.

And the No 1 seed said: “Speaking of a high level, Medvedev is the guy. Probably plays at the hightest level in the last three or four months.

“He is on a winning streak, winning indoors tournaments, World Tour Finals. He had one Grand Slam final at US Open against Rafa and Stefanos has never reached a Grand Slam final so it going to be interesting to see them play.

Karatsev had been bidding to become the lowest-ranked man to reach a Grand Slam final since Djokovic’s coach won Wimbledon in 2001 ranked No 125.

He started strongly but Djokovic finished the 35-minute first set by winning 12 of the last 13 points. The Russian fought back from 1-5 down in the second set and had two break points to draw the match level at 5-5 before the world No.1 took his third set point and punched the air in celebration.

And the Serb, who restored order in the third set, led the applause as Karatsev left the Rod Laver Arena at the end of the match. “We need to give him a hand,” said the 17-time Grand Slam winner. “Huge congratulations to him in reaching the semi-finals. I don’t think it has ever happened in the history of tennis. Well done. He played a great tournament.”