Organisers of the ATP Cup – to be held in Sydney at the start of January – say world No.1 Novak Djokovic has committed to the men’s teams event.

Confirmation that Djokovic, who would be chasing a 10th Australian Open at Melbourne Park in January, will be in Sydney is the strongest sign that the Serbian champion will take his spot in the field in Melbourne for the first major of 2022. 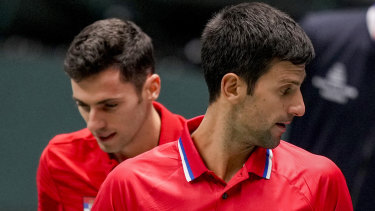 Novak Djokovic has been named to play in the ATP Cup.Credit:AP

All players heading Down Under for the Australian Open must be vaccinated. Djokovic has previously refused to disclose his vaccination status.

The 16 teams for the ATP Cup, an event run by Tennis Australia and the ATP, were confirmed at the tournament launch in Sydney.

An article on the official ATP Tour website reported the following:

“Top seed Serbia, headlined by world No.1 Novak Djokovic, will lead Group A, which will also feature Norway, Chile and Spain. Two years ago, Serbia lifted the trophy at the inaugural ATP Cup by defeating Spain in the championship match.”

To play without being vaccinated in Sydney, the NSW government would have to apply for an exemption for Djokovic to enter the country and the 34-year-old would have to undergo 14 days’ quarantine upon arrival.

That same option was also open to the Australian Open organisers, but the Victorian government has repeatedly said it would not apply for exemptions.

While Djokovic’s name is the most significant among the list of committed players, world No.6 Rafael Nadal is missing from team Spain.

Nadal, a winner of 20 grand slam titles alongside Djokovic and Roger Federer, will return to tournament play at an exhibition event in Abu Dhabi this month and is still expected to head to Melbourne for the Australian Open, starting on January 17.