At the end of five complicated, sometimes fractious weeks in Australia Novak Djokovic came up with the response that he always does.

He won the Australian Open, in more convincing fashion than seemed likely. He has won it nine times, holding the trophy aloft so often that it is easy to become blind to the size of the achievement.

Half of his eighteen Grand Slam titles – now just two behind Roger Federer and Rafael Nadal – have been claimed in Melbourne. 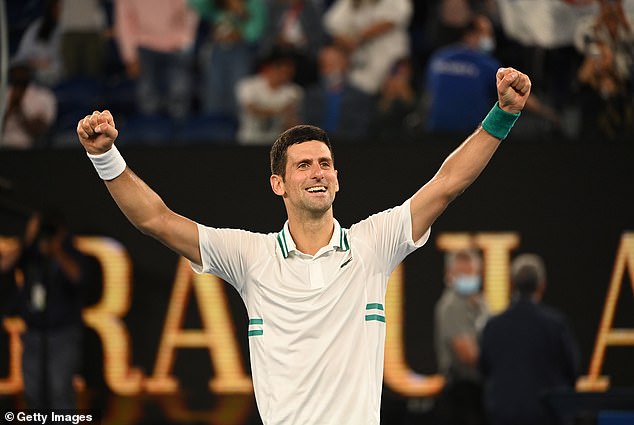 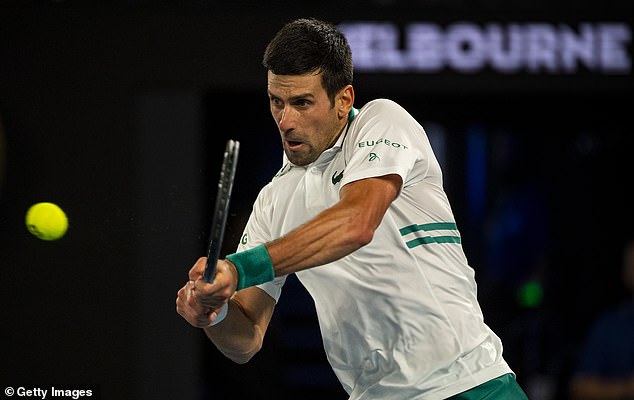 This one was seized against a backdrop of what he revealed was a torn abdominal muscle, which threatened to put him out of the tournament. He did not say whether it was a grade one tear or something more serious, which may yet emerge in a fly-on-the-wall documentary coming out later this year.

He had also been criticised last month for making suggestions about how players should be treated amid the quarantine required upon arrival. That had not been well received in a country nervous about the importation of Covid.

‘Everyone has the right to say what they want to say,’ he reflected after seeing off Daniil Medvedev 7-5 6-2 6-2 with a brilliant performance. ‘It’s a matter on my side, in which way I’m going to react. I didn’t allow it to hinder my performance. I think winning the trophy is in a way my answer.’ 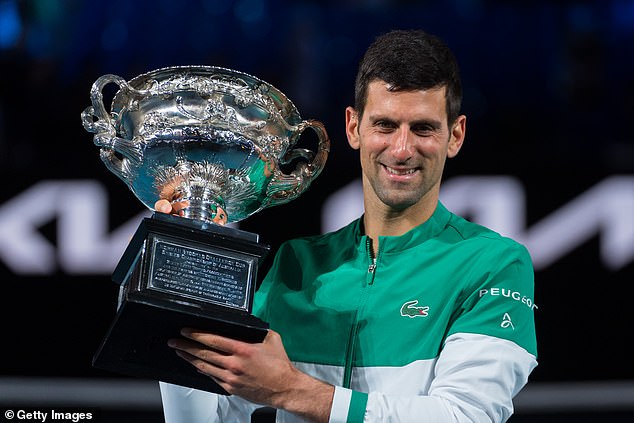 This was never a straightforward Grand Slam, and it remained contentious right up until the post-final ceremony.

During it Jayne Hrdlicka, President of Tennis Australia, spoke of the optimism the Covid vaccines are bringing, only to be met with a chorus of booing from some parts of the Rod Laver Arena.

Her thanks to the Victoria government, who moved heaven and earth to get a hugely complex bio-secure event on at all, met with the same response. Clearly no good deed goes unpunished by some parts of the Melbourne population.

Djokovic was in slightly introspective mood later as he considered the previous five weeks: ‘At the beginning we didn’t feel so welcome, judging by what media was writing about tennis players being here,’ he said. ‘Of course it hurts. I have emotions. I don’t enjoy when somebody attacks me in the media.’ 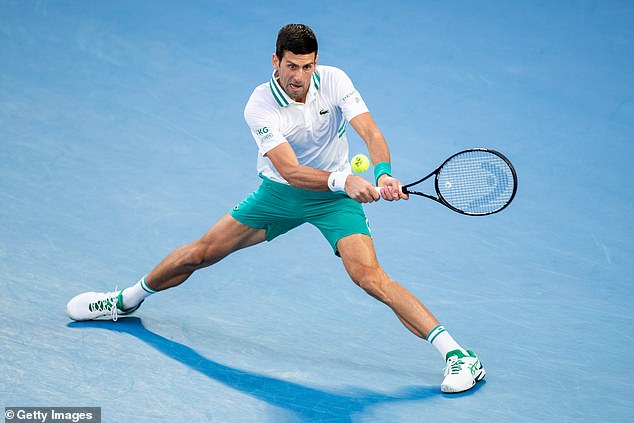 The 33-year-old was in sensational form, presenting a brick wall to runner up Daniil Medvedev 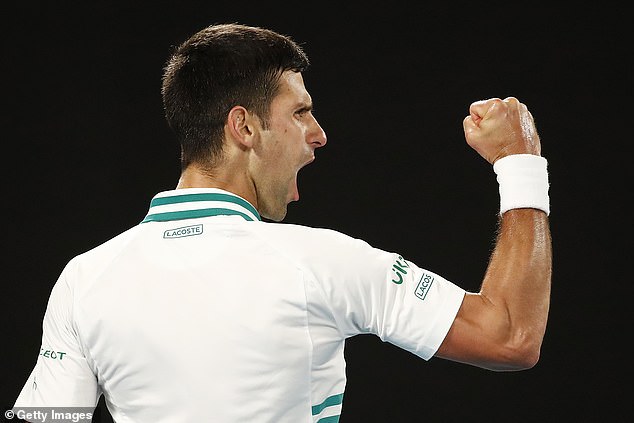 In this sort of form, it will be tough to stop Djokovic from re-writing tennis’ history books

Looking ahead, he also projected that he would modify his tournament schedule, because restrictions around Europe made it more difficult for his family to accompany him.

‘ I miss them. I mean, at times it rips my heart apart, to watch my kids,’ he said. ‘Not being able to take my family on the road is something that is a big problem for me.’

When he plays like Sunday it is difficult to see what is going to stop him from rewriting tennis history, other than injuries or a shifting in life priorities, even though he will be 34 by the time of the French Open.

There was every expectation that Medvedev would run him close, coming in on the back of a 20-match winning streak. That was the same sequence enjoyed by women’s champion Naomi Osaka, who took the women’s title on Saturday against American Jennifer Brady. 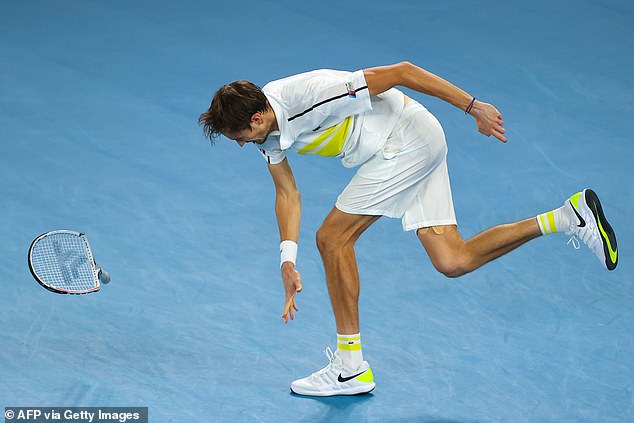 Medvedev, meanwhile, got nowhere near Djokovic but will enjoy his moment in the future

Medvedev was to meet with the same brick wall that all the challengers have faced in recent years, apart from when Dominic Thiem won the US Open when Nadal and Federer were absent, and Djokovic got himself disqualified.

The Russian spoke touchingly about the champion in his runners-up speech, saying how friendly Djokovic had been when he was a young nobody being used as practice fodder.

He also tried to articulate what is so hard about playing the big three on the biggest stages: ‘I’ve played them all. When they’re in the zone, and I’m not shy to say it, I feel like they’re just better tennis players, which shows in the facts and numbers.

‘For sure, when we are also in the zone, we can bring them big fight, we can win some matches, some maybe big titles. But it’s just that the percentage is on their side. 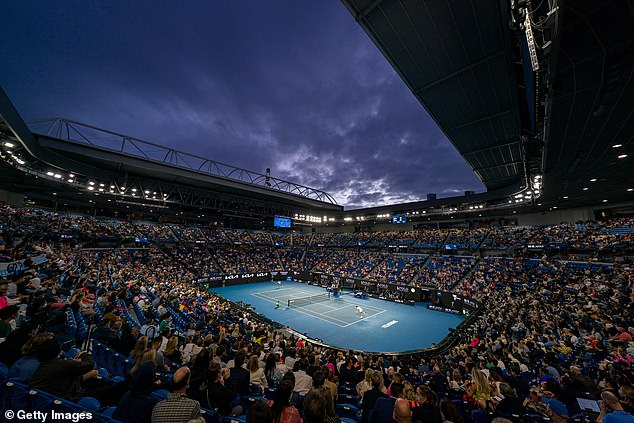 The tournament was hosted in a backdrop of covid-19 concerns in Victoria, Australia

‘We’re talking about some Cyborgs of tennis, in a good way. They’re just unbelievable.’

Djokovic got everything right in this match. From the start he sought to take time away from his opponent, meeting the ball early and moving him constantly to the right onto his forehand.

Medvedev quickly recovered an early break and looked in the ascendancy at 4-4, only for Djokovic’s serve to ramp up. The Serb also pulled him forward with drop shots, into the part of the court where he is least comfortable.

After the Russian had forfeited his early break of serve in the second set he quickly became frustrated. At 2-5 he smashed his racket and then started gesticulating at his coach Gilles Cervara. The Frenchman had walked out of the stadium during his third round match the previous week after being shouted at.

Temperamentally he may not be ready to win a Grand Slam, although he certainly has the talent. In a way the Russian is reminiscent of Djokovic much earlier on in his career, and that did not work out too badly.