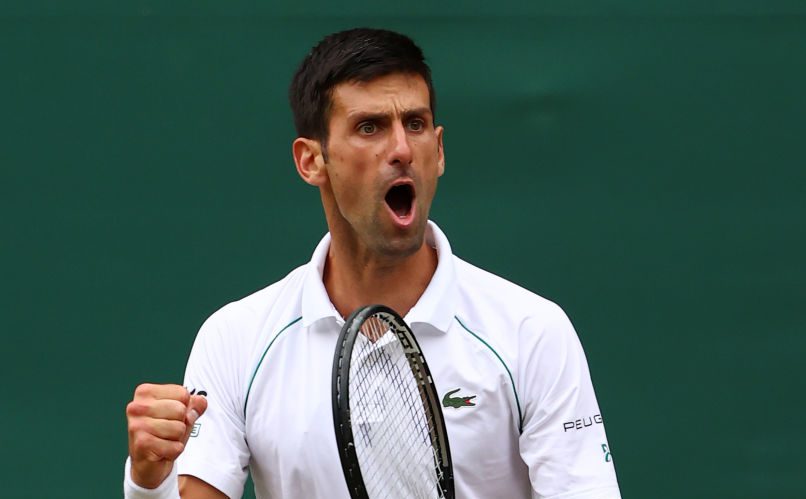 An out-of-sorts Djokovic defeated 10th seed Denis Shapovalov 7-6 (7-3) 7-5 7-5 in the semi-finals on Centre Court on Friday evening as he took his next step towards history.

A 20th Grand Slam win this weekend would tie him with Federer and Nadal and keep his hopes of sealing a Golden Slam – where a player wins all majors and the Olympics in the same season – alive ahead of upcoming trips to Tokyo and New York.

Djokovic will pass his rivals at the US Open if he does complete the Calendar Slam – something that has not been achieved since Rod Laver in 1969.

No man has completed a Golden Slam but Djokovic – whose case to be considered the greatest of all time strengthens by the week – has remained an immovable force while his great rivals decline and it will take a performance of some magnitude to stop him.

That said, Djokovic – who saved 10 of 11 break points faced – was far from his convincing best against Shapovalov, who was wasteful in big moments having largely played the better tennis.

But he will need to improve against Berrettini, who is a big enough striker of the ball to take the match out of the Serb’s hands. Should he give the Italian too many gifts, he may find it harder to claw back.

One suspects he will and therefore claim the title – despite Queen’s champion Berrettini’s wonderful form on the grass this summer – which would be his sixth at Wimbledon and third in a row.

It’s doubtful he will stop there. Never mind Federer and Nadal’s record, Serena Williams’s Open Era total (23) and Margaret Court’s all-time haul (24) are on the horizon. On current evidence, it would take a brave person to back against Djokovic, 24, ending his career with both records.

What remains remarkable is his ability to manage a match. He rarely moves out of second gear but will do so when required, regularly saving his best tennis for the biggest moments of the match – something Shapovalov found out the hard way.

This was a seventh straight loss to Djokovic at what was the end of his best run at a Grand Slam. His time will surely come and he’ll be a popular figure at the All England Club for many years. But this is Djokovic’s time.

Shapovalov drew blood first. Djokovic saved two break points in the third game of the match but crumbled on the third as he was unable to connect with a thumping backhand from his opponent.

There was a nervy finish as Shapovalov went 0-30 down on serve but he was spared facing two break points as Hawk Eye proved a forehand had clipped the back of the line before serving an ace on the replayed point to level at 30-30.

Djokovic did get a break point moments later after some remarkable defence led to Shapovalov sending a forehand long but a one-two punch helped him wriggle out of danger.

The top seed wasn’t done there, however, he continued probing and crafted a second break point, which was converted as Shapovalov sent a backhand long.

Ultimately, it required a tiebreak to split them. Shapovalov started with a cool backhand pass to get a mini-break but a drop-shot that barely got past his own service line surrendered that advantage.

A wild backhand from Shapovalov saw Djokovic take the lead and he was 4-2 up at the changeover despite a surprise double fault.

In truth, it was a poor tiebreak from Shapovalov – who failed to win a point on his own serve – and the set finished on a sour note as he doublefaulted to fall behind. Really, he should have been in front.

The same was true of the fourth game of the second set. A catalogue of errors from Djokovic, including a woeful volley miss and a doublefault saw Shapovalov take a 0-40 lead but he failed to break as Djokovic drew level at 2-2.

Two more break points came and went for Shapovalov as an out of sorts Djokovic continued to cling on – and the feeling grew that the inevitable was coming.

Sure enough the break came, with Djokovic stepping up his level in the biggest moment again, and Shapovalov was left fuming at the umpire as the Serb served out the set. ‘A complete joke,’ he moaned as he felt a point should have been replayed after a successful Djokovic challenge rather than his opponent being handed the point.

The Canadian again came on strong at the start of the third set but couldn’t convert three more break points – a familiar theme – and Djokovic roared as he held under severe pressure once more.

It was Shapovalov’s turn to dig himself out of a hole in the next game, saving two break points after some big serving from 15-40 down and another at the first deuce.

He couldn’t deny Djokovic in the 11th game of the third set. Djokovic broke and was soon into a 30th Grand Slam final.