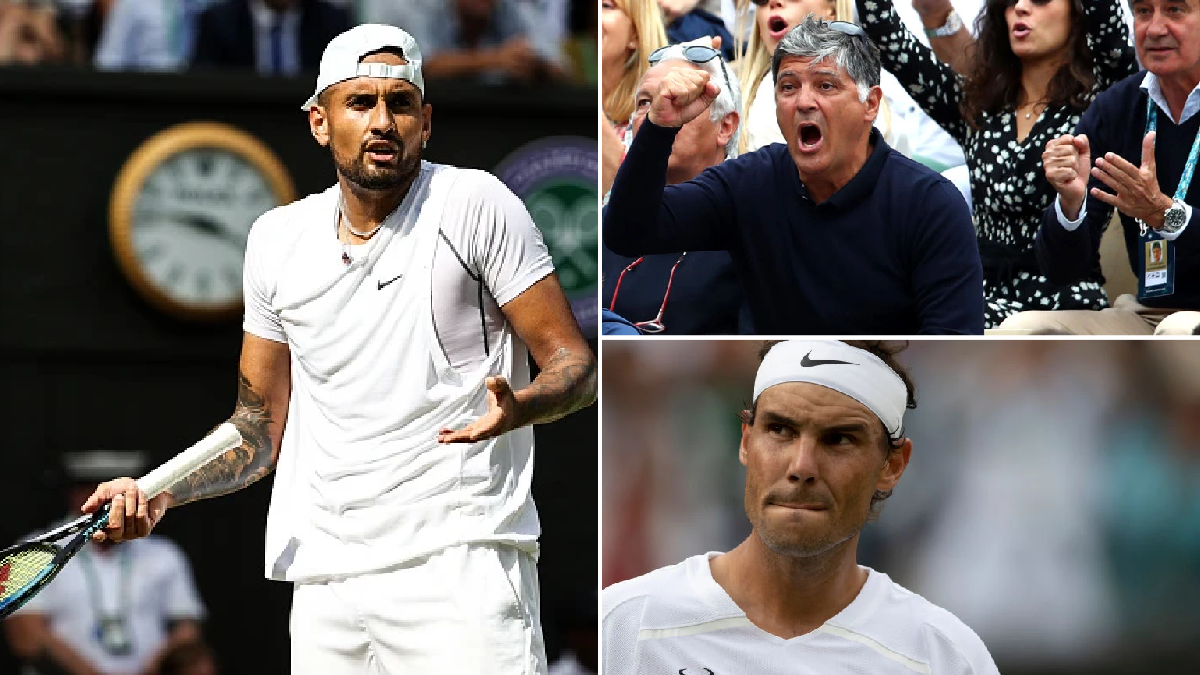 Kyrgios was due to play Nadal in the semi-finals of this year’s Championships but the 22-time major champion was forced to withdraw with an abdominal injury.

That saw Kyrgios progress to the Wimbledon final – his best-ever Grand Slam performance – where he lost to Novak Djokovic over four sets on Sunday.

It was a controversial tournament for the Australian world No.45, who was involved in various high-profile incidents on and off the court, such as calling a line judge a ‘snitch’, an umpire a ‘disgrace’ and spitting towards a spectator.

Speaking about Kyrgios’ on-court antics, Toni Nadal wrote in his El Pais column: ‘In the decisive moments, he was unable to control his anxiety.

‘That, again, degenerated into constant rebukes to his team as if they were to blame for the undesired paths the scoreboard was taking for him.

‘The [Wimbledon final] lacked great brilliance, mainly because there were too many unplayable points.

‘The lack of perseverance of the Australian, especially in regards to maintaining his aggressiveness, revealed the main problem that, in my opinion, his game possesses.

‘He has a bad habit of hitting too many balls in any way, basically without paying attention and in a bad position.

‘In today’s tennis, due to the speed at which the ball goes, there is no choice but to look for a good position to have good control.

‘The great players measure their steps well, seek a good position, and from there, try to hit a good shot and increase the chances of victory.

‘Nick Kyrgios, with his messy way of understanding the game, is handicapped not so much by what he does with the ball, but by the way he wants to do it.

‘It is very difficult for him to achieve the continuity that requires scoring points. Tennis is a sport of repetition, rather than the spectacular.’

Kyrgios, who is set to star in an upcoming Netflix documentary in a similar style to Formula One’s Drive to Survive, saw his tactics defended by his brother Christos.

‘He wouldn’t be our Nick if he wasn’t fiery during the match, and that’s how he plays, that’s how he gets himself up,’ Christos Kyrgios said on Australian breakfast television show Today.

‘He tries to increase his intensity and whatever else and that’s how he does it, and that’s what we know from him. The fight was there the whole match [of the Wimbledon final], the match was incredible.’