Nick Kyrgios produced a brilliant fightback to defeat Ugo Humbert and remain in the Australian Open on Wednesday morning. Kyrgios didn’t have things his own way, however, and failed to hide his anger on more than one occasion.

Kyrgios got off to a poor start in Melbourne and faced a mountain to climb in order to stay in the competition.

After losing the first set, the hometown hero smashed his racquet on the floor in frustration as he failed to hide his frustration with his own performance.

Then, in the crucial fifth set, he went 1-0 down but thought he had done enough to win the second game, only for the umpire to deem he had hit the net with two of his services.

That prompted Kyrgios to shout: “That’s f***ing bull****. Bull****, look at the score,” in a furious exchange with the official. 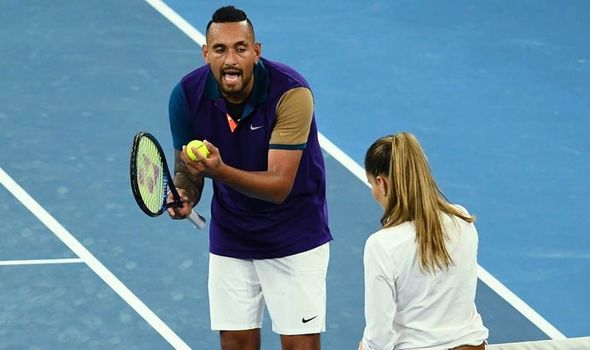 But ultimately, he was able to lean on the vocal support of the crowd at the Melbourne Arena in order to progress to the third round of the tournament.

He lost the opening set 7-5 after having his service broken, but rallied back to win the second set 6-4.

The cracks were there to see as early as the second set, however, and at one point he appeared overwhelmed by Humbert’s performance.

After playing a backhanded shot deep into Humbert’s half, Kyrgios thought he had the point won, only for the Frenchman to produce a brilliant driven shot past him to take the point.

Kyrgios stood motionless before giving a thumbs up to Humbert, seemingly admitting he couldn’t do anything about the shot.

The brash Australian went on to lose the third set in more convincing style with a 6-3 collapse before battling back again in the fourth.

Kyrgios pulled out some sublime tennis when his back was against the wall and almost broke Humbert in a crucial game when down 4-3 to the Frenchman.

But Humbert smelt blood and was ruthless in holding service, and showed great composure to do so considering the fans in the arena seemed to be fully behind Kyrgios. 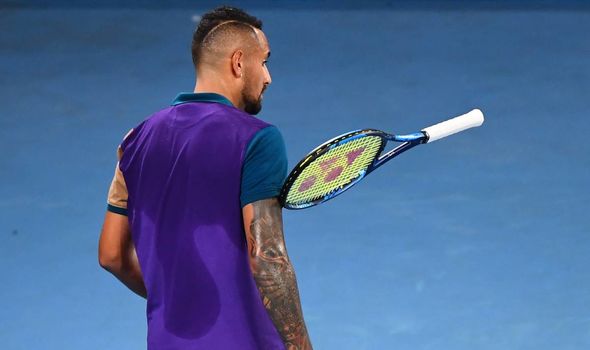 Despite holding his service while 5-3 down, he was right up against it as Humbert attempted to serve out for the match and progress to round three.

Humbert started the service game by firing an ace past Kyrgios as it looked like he was ready to steamroll his way past the hometown hero.

Kyrgios refused to go out without a fight, however, and forced three deuces before breaking service.

A clean break of service with an excellent cross-court shot sent the crowd into hysterics as he took the set to 5-5. 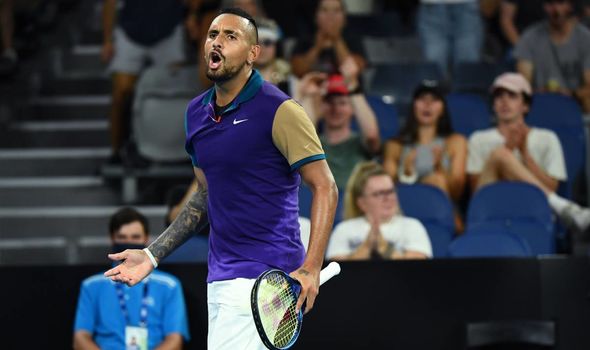 Once the set was taken to a tie-break, Kyrgios turned on the style and seemed to revel in the admiration of the fans to create a hostile environment for Humbert.

He raced to a 5-1 lead in the tiebreak and celebrated a Humbert error by holding out his arms and encouraging the fans to increase the noise levels.

Kyrgios was able to lean on the support of the fans to win the set in style, drilling a second serve straight past the Frenchman.

In the all-important deciding set, Kyrgios was ruthless despite his verbal exchange with the umpire, and blitzed his way to a 3-1 lead. Despite Humbert coming back to make it 3-2, Kyrgios knew victory was in sight and kept going, holding service to put the set at 4-2.

Humbert held service despite a few errors and took the set to 5-4 in Kyrgios’ favour, with the Australian once again having the chance to seal the win.

In the end, he did it in style with a thumping serve, which forced Humbert to fire his return high into the stands as Kyrgios fell to his knees with joy.