Nick Kyrgios suffered a frustrating defeat to Hubert Hurkacz in the quarter-finals of the Canadian Open in Montreal. The outspoken Australian star – who has been in scintillating form this summer – battled for two sets but ultiumately ran out of gas to lose 7-6(7-4) 6-7(5-7) 6-1 to Hurkacz.

The two went back and forth in the opening set, with Hurkacz finding himself 5-4 up before Kyrgios brilliantly held as he overwhelmed with his opponent with his tremendous serve. As the players went through the motions in Montreal, a tie break to settle the first set felt inevitable.

Hurkacz used his own powerful serve to move into a 6-4 lead as Kyrgios struggled to return. Just as the Australian looked as though he might stave off a few set points, the Polish star hit a dramatic winner to seal the first set tie break 7-4.

The first set flew past in just 38 minutes, and the second set followed the rapid theme. Kyrgios made light work of the opening game and had a chance to break Hurkacz in the second, but the Polish star expertly held on, using his enormous 6 ft 6 ins frame to reach a drop shot before powering a volley into the ground, with the ball looping over Kyrgios. 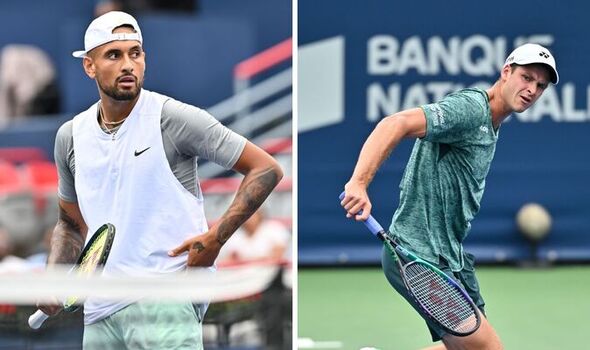 The Australian’s second service game was more of a battle, and Kyrgios overcame some excellent returns by Hurkacz to move 2-1 up. Kyrgios wasted no time between serves and raced into a 3-2 lead after once again failing to stop the Hurkacz serve.

Kyrgios – who won his first ATP title in three years as he claimed the Citi Open title in Washington earlier this month – tried with all his might but he appeared to be exhausted. The Australian simply couldn’t stop Hurkacz’s serve, and another tie break to settle the set was on the cards.

Kyrgios enjoyed a large slice of luck as his shot trickled over the net and bounced in to move 4-2 up, but the Polish star – as he did all match – came roaring back. However, Kyrgios held his nerve and led 6-4 before Hurkacz once again responded and held set point – but he couldn’t avoid the second one as Kyrgios powered a stunning ace, his 17th of the afternoon, to seal the second set. 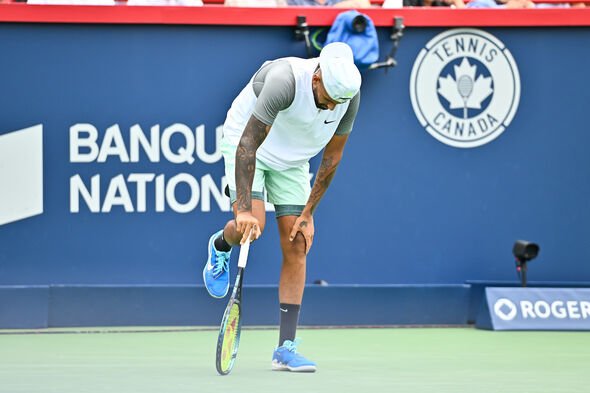 The third set proved to be particularly frustrating for Kyrgios as he ran out of stamina, with Hurkacz racing into a 3-0 lead. His usual antics began to creep into his game too, as he swore loudly following a few unforced errors.

The Australian didn’t even try to contest one rally as he gave Hurkacz a full court to aim for only for the Polish star to surpisingly make an error. Regardless, the 25-year-old held on to move into a 4-1 lead in the crucial third set.

Kyrgios showed some admirable fight with a number of stunning forehands, but his tournament was over. Hurkacz broke the Australian maverick one final time before he was serving for the match – and he breezed through the game.

Hurkacz will face either Casper Ruud or Felix Auger-Aliassime in the semi-finals at the Canadian Open.