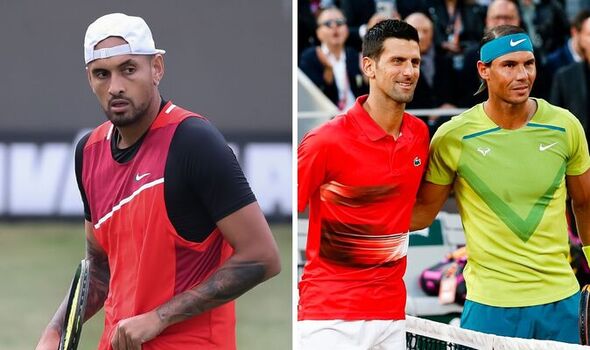 Nick Kyrgios has named Novak Djokovic and Rafael Nadal as two of his top five athletes as he weighed in on the ATP’s decision to remove ranking points at Wimbledon. The Aussie claimed that “everyone” should be playing Wimbledon despite being unable to boost their ranking at the tournament as he confirmed his participation.

Kyrgios has enjoyed a successful start to the grass-court season, downing world No 4 Stefanos Tsitsipas in Halle on Wednesday to book his spot in the quarter-finals. After the match, he hailed the likes of his rivals Nadal and Djokovic as he shared his stance on Wimbledon’s ranking points strip, claiming everyone should play regardless of points.

“It’s great. As long as these legends… I think humans always take athletes for granted. Roger [Federer], Rafa [Nadal], Novak [Djokovic], LeBron [James], Serena [Williams], these athletes are so rare. They’re just amazing. I think as long as they want to keep playing we’ve got to keep taking it in and enjoying that,” he said after coming from behind to defeat Tsitsipas 5-7 6-2 6-4, having made a dig at Nadal during the match.

“The time is nearly up for all these players. It’s amazing to see Serena playing again and playing the biggest tournament in the world. I think it’s a great example that every player should try and play Wimbledon rather than not play for the points.”

JUST IN: Williams’ comeback partner Jabeur reacts to being picked for doubles

The world No 65 also shared his Wimbledon “childhood dream” after claiming he was “one of the best on grass” following his third career win over Tsitsipas. He continued: “As a kid you want to win Wimbledon, you want to play Wimbledon.