Nick Kyrgios had a spectator temporarily thrown out of Wimbledon during his final clash with Novak Djokovic on Sunday. And, now, the supporter in question has responded. Tempers rose amid a sweltering day on Centre Court, with the Australian getting all fired up.

Kyrgios was livid during his match with Djokovic, telling the umpire to act on the behaviour of a woman who he perceived to be drunk. He said the fan in question had downed ‘700 drinks’ and, as he grew more frustrated, his tennis suffered as a result.

But, now, Polish medical lawyer Ania Palus has claimed she was trying to support Kyrgios – while also expressing a belief the heat had got to her – and revealing she’d only had two drinks.

“I wanted to show we were for him, I wanted to encourage him,” she told The Sun. In another interview with The Telegraph, she added: “I wanted to give him support. Maybe I took it too far… but I only had good intentions. It’s the temperature for me, I had no hat. I’m really sorry.”

The lawyer was then allowed back into the match after 15 minutes in order to watch the rest of the proceedings. After having a Pimms and a glass of wine, she was then given water by officials.

Kyrgios had ranted on the sidelined by saying: “She’s distracting me when I’m serving in a Wimbledon final. There’s no other bigger occasion, you didn’t believe me and then she did it again. It nearly cost me the game.

“Why is she still here? She’s drunk out of her mind and speaking to me in the middle of a game. What’s acceptable?’”

When the umpire responded by saying ‘nothing is acceptable’, Kyrgios said: “OK kick her out. I know exactly which one it is. 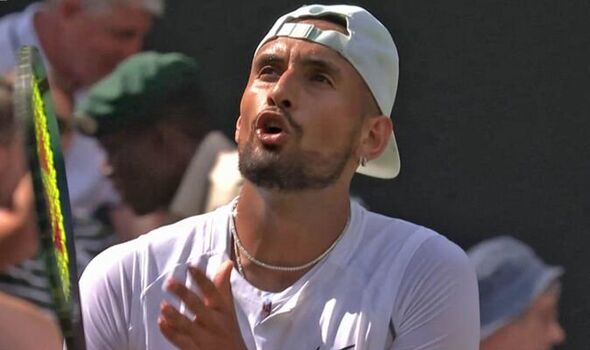 “The one in the dress, who looks like she’s had about 700 drinks bro.”

Kyrgios also opened up on the incident when speaking following his defeat to Djokovic, labelling the fan as ‘smashed’.

“I wouldn’t say she cost me the game but you know like I’m playing Wimbledon finals against probably one of the best players of all time,” he stated. “I don’t need someone absolutely smashed talking to me point in, point out, do you know what I mean?

“I’m all for having a great time but speaking between first and second serve like to me, you know! I’ve been on a couple nights out in my life and I knew that she had too many. 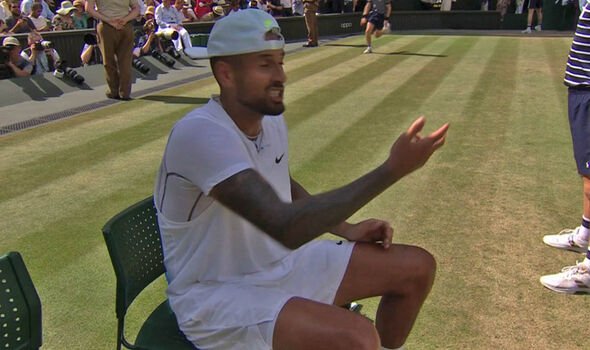 “I told the umpire, I was like, ‘She’s speaking to me a lot and she’s drunk, what you gonna do about it?’ He was like, ‘I didn’t know she was drunk’ and then she continued and I was like that’s when you gotta maybe give her a (cup of) water or take her out.”

Kyrgios did, though, make sure to pay tribute to Djokovic – who now has 21 Grand Slam titles to his name. “He [Djokovic] is a bit of a god, I’m not going to lie,” said the Australian with a smile on his face.

“I thought I played well, but first of all, congratulations to Novak and your team. I don’t know how many times now. 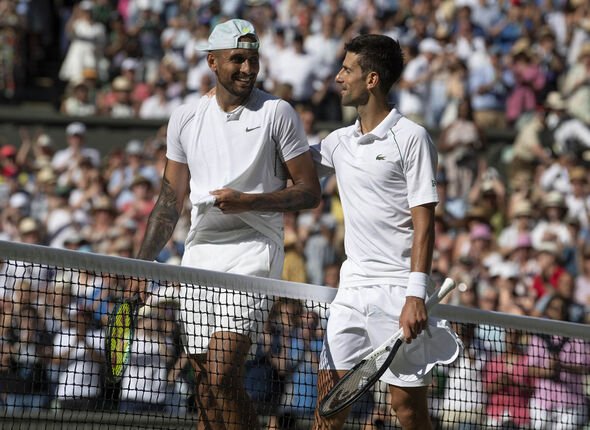 “Obviously, thanks to all the ball kids, umpires – I know me and you have a tough relationship, but I thought I’d thank you for putting up with it, and the crowd, it’s been an amazing couple of weeks for me personally.”

Djokovic, meanwhile, tipped Kyrgios to make more Grand Slam finals in the future – while joking about a ‘bromance’ they now have.

“It is tough to find consolation words at a moment like this but you showed why you are one of the best players in the world,” he said. “I wish you all the best. I respect you a lot and you are a phenomenal talent. I never thought I would say so many nice things about you! OK, it’s official: it is a bromance.”