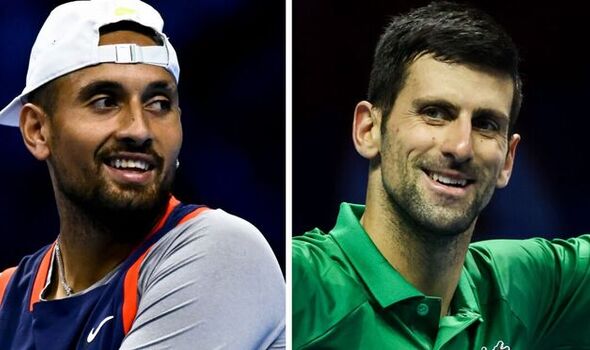 Nick Kyrgios has fired a warning that he expects to beat 21-time Grand Slam winner Novak Djokovic when they meet for an singles match during an exhibition tournament next month. Both players are set to compete in the World Tennis League team event which take place in Dubai starting on December 19.

The 16-player field consists of eight men and women who have been randomly split into four teams for the event taking place between December 19 and 24 at the Coca-Cola Arena. World number five Djokovic heads a men’s field including Kyrgios along with Alexander Zverev, Grigor Dimitrov, Dominic Thiem, Felix Auger-Aliassime, Gael Monfils and Andreas Seppi.

Women’s world number one Iga Swiatek heads the women’s field after an impressive season which saw her win both the French and US Open titles. Wimbledon champion Elena Rybakina is also part of the women’s field along with Anett Kontaveit, Paula Badosa, Simona Halep, Aryna Sabalenka, Bianca Andreescu and Sania Mirza.

Kyrgios reached his first singles Grand Slam final at Wimbledon this season and won the Australian Open doubles crown with fellow countryman Thanasi Kokkinakis. The Australian has been placed on the ‘Eagles’ team alongside WTA Finals champion Garcia, Andreescu and Seppi.

Djokovic will play on the Falcons team alongside Badosa, Sabalenka and Dimitrov with the two teams meeting on December 21. Kyrgios will meet Djokovic in a singles match and the Australian is eagerly anticipating the match.

In an Instagram post Kyrgios said: “The team that has my eye is definitely Novak and the Falcons. I can’t wait to come against them and I can guarantee an Eagles win.” Matches during the tournament will be just two sets long with with 10-point tiebreaks deciding the outcome if both competitors win a set each.

Kyrgios said the mixed gender team format will make the exhibition tournament an exciting one for fans to watch. He added: “I thrive and have so much fun in a team environment. An event like this for the fans is so important.

“We have fan interactions, the ability to see female and male athletes come together and achieve something, is really really cool.”