Nick Kyrgios will chase a career-best grand slam semi-final berth at Wimbledon despite confirmation the tennis star will face court in Australia next month accused of assaulting his former girlfriend.

Tournament organisers declined to comment on the allegations on Tuesday, citing legal proceedings, but have confirmed the 27-year-old remains scheduled to meet Chilean Cristian Garen on court one on Wednesday evening (AEST).

“We have been made aware of legal proceedings involving Nick Kyrgios in Australia, and as they are ongoing, we are not in a position to offer a comment,” a statement said. “We are in touch with Nick’s team and he remains scheduled to play his quarter-final match tomorrow.”

Kyrgios has been summoned to appear at the Australia Capital Territory Magistrates’ Court on August 2 on an allegation of common assault against Chiara Passari. The offence carries a maximum jail sentence of two years.

ACT Police said in a statement on Tuesday evening that the allegations related to an incident in December last year, which Kyrgios’ barrister says was “in the context of a domestic relationship”.

Ranked 40 in the world, Kyrgios needs just one more victory to reach the final four at any of the sport’s four majors for the first time. 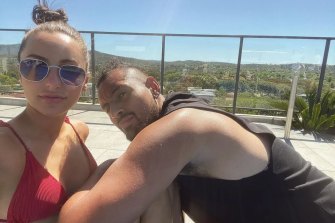 Passari and Kyrgios during their time together.

The Australian’s legal representatives released a statement early Wednesday morning (AEST), taking issue with media reporting stating that their client had been “charged”.

Pierre Johannessen, of Johannessen Legal, said Kyrgios was committed to addressing “any and all allegations”.

“At the present time, the allegations are not considered as fact by the court, and Mr Kyrgios is not considered charged with an offence until the first appearance,” he said.

“Until the court formally accepts the prosecution will be proceeding with a charge, and that the charge before the court is to be applied to the person summoned to appear, it may be misleading to the public to describe the summons in any other manner than a formal direction to appear to face allegations.” 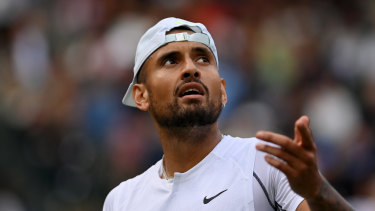 The allegation was made public on the eve of his Wimbledon quarter-final showdown against world No. 43 Garin. The Herald and The Age have been told Kyrgios was on the practice courts at Wimbledon on Tuesday morning (UK time) when news of the court case emerged.

He later moved to a court out of the view of reporters and photographers and did not answer any questions.

“I feel like I’m in The Last Dance,” he was heard to say to his trainer, a reference to the popular 2020 Netflix series about Michael Jordan and the Chicago Bulls.

Kyrgios’ barrister, Jason Moffett of Key Chambers, earlier told The Canberra Times that he had been briefed on the matter. The newspaper reported the summons related to an allegation that Kyrgios had “grabbed” his former partner.

Kyrgios has since posted a picture of himself with a young fan on social media with the caption “all my youngsters out there, believe in yourself”.

In October last year, police were called after Kyrgios and Passari, who have since separated, had an argument at a quarantine hotel in Adelaide.

A police spokesman said at the time that they responded to a “verbal argument” but after an investigation “no offences were disclosed and both parties will now spend the remainder of their quarantine in separate rooms”.

Passari later made a series of allegations of infidelity, posting screenshots of heated text messages she and Kyrgios allegedly sent each other after their argument.

The tennis star is now dating Sydney fashion blogger Costeen Hatzi, 22, who he described this week as “the best girlfriend in the world”.

Kyrgios has been in strong form over the eight days of Wimbledon and is one win away from a likely semi-final showdown against Rafael Nadal.

However, his behaviour on court has a barrage of criticism after he berated the chair umpire in his third-round win against Stefanos Tsitsipas.

The body which runs the men’s tennis tour, the ATP, would not comment on the situation.

“The ATP is aware of the Australian case involving Nick Kyrgios but as legal proceedings are ongoing, it would be inappropriate to comment further at this time,” the ATP said via email.