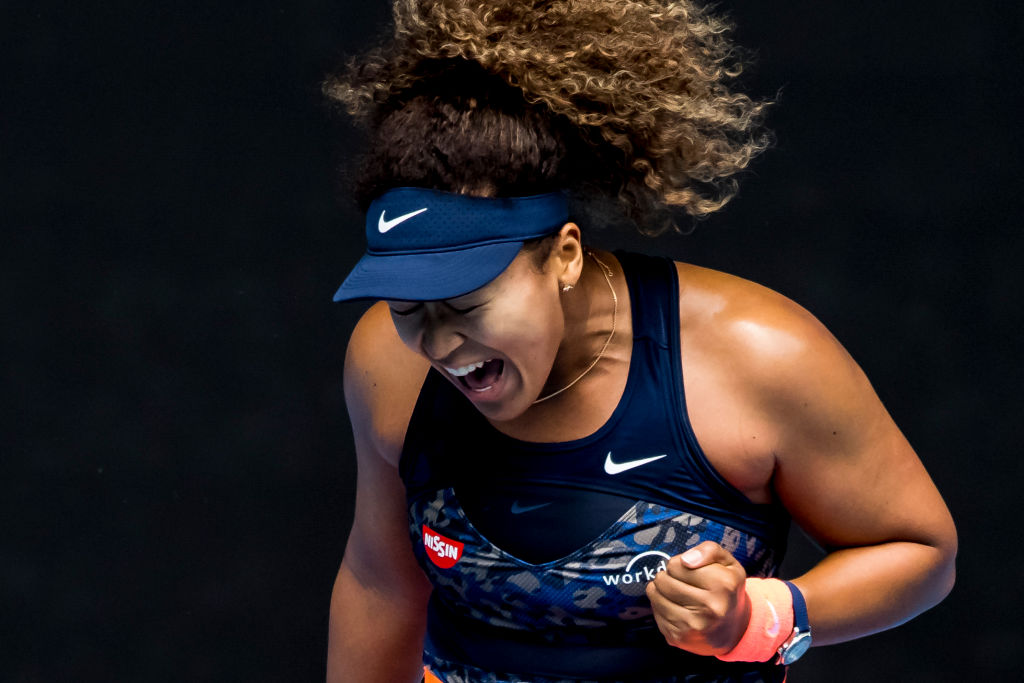 Naomi Osaka and Serena Williams were both forced to dig deep on Sunday as they edged into the quarter-finals of the Australian Open.

Osaka, the world No. 3 from Japan, saved two match points on her serve in a tense battle with Garbine Muguruza before eventually eliminating the two-time Grand Slam champion.

Asked how she scraped through, the three-time Grand Slam champion said: ‘I’m not really sure, to be honest. I think I was just trying to fight for every point, then it sort of led me to win. I don’t know.

‘I also think for me, I felt the entire match I was overthinking. There was a moment when I got angry and, like, hit my racquet on the ground. I feel like I released a lot of the thoughts that I had. It just made me go more into, like, instinct-based tennis.

‘For me, I felt like Wim [Fissette, her coach] told me so much information before the match, it wasn’t really clicking. But the closer it got, the more I felt like I could rely on that information, yeah.’

Osaka, who has never lost from the quarter-finals of a major, beat her next opponent the last time she won the Australian Open in 2019 but she has never enjoyed the experience of facing the world No. 71.

‘She’s one of those players that, for me, if it was a video game, I would want to select her character just to play as her,’ added Osaka.

‘Because my mind can’t fathom the choices she makes when she’s on the court. It’s so fun to watch. It’s not fun to play, but it’s really fun to watch.’

Osaka remains on course for a semi-final meeting with 23-time Grand Slam champion Serena Williams, who faced an epic battle of her own.

She downed Belarus’s 7th seed Aryna Sabalenka in three sets but was broken four times in a thrilling contest.

Williams, 39, led 4-1 in the final set but was pegged back by the 22-year-old – who is yet to pass the fourth round of a Slam – before holding her nerve to get through.

‘It was obviously real important because I didn’t want to be out of the tournament, so it felt good to kind of clutch that in the end and get through that,’ said Williams.

‘I  just felt like even games that I lost, I was so close to winning. Not all games, but probably most of those games.

‘I just needed to play better on the big points. I knew that I could. I still hadn’t reached my peak. I was like, “Okay, Serena, you got this, just keep going”.’

Midway through the second set, Williams – who has had ankle problems in the past – suffered an awkward looking fall but she was relieved to do no major damage.

‘It didn’t hurt at all. I didn’t roll my ankle, so that was good. Yeah, I think it was just dramatic, me being dramatic,’ she smiled.

‘My first thought was, Not another ankle sprain in Australia. But I knew immediately that it wasn’t. Then I was more embarrassed than anything. I was like, “Oh, my goodness”.

In the men’s draw, Russian qualifier Aslan Karatsev continued his remarkable run, fighting back from two sets down to knock out 20th seed Felix Auger-Aliassime.