Jim Courier has insisted “Rafael Nadal would like a word” after Mark Petchey claimed he doesn’t believe “anybody could live with” the quality of tennis Nick Kyrgios is producing following his stunning US Open success over world No 1 Daniil Medvedev. Petchey declared it was “probably the best performance” he have ever seen from the Wimbledon runner-up who progressed to the quarter-finals in Flushing Meadows for the first time ever.

The Aussie prevailed 7-6(11) 3-6 6-3 6-2 in a blockbuster fourth-round clash with defending champion Medvedev to underline his status as a contender for this year’s US Open. Hailing Kyrgios’ performance, former tennis star turned commentator Petchey tipped the world No 23 to claim his maiden Grand Slam this week if he can continue to maintain such form.

“It was probably the best performance I have ever seen from Nick,” Petchey said on Amazon Prime. “The expectation level as well about how he should be playing, we have seen it consistently at Wimbledon as well. The quality of tennis in sets three and four, I’m not sure anybody else could live with. When Nick plays like that, tennis is an art.”

However, co-commentator Jim Courier was quick to express his disagreement. The American responded by suggesting current world No 3 and 22-time Grand Slam champion Nadal may feel otherwise. Courier interjected: “Rafa would like a word.”

JUST IN: US Open star threatens to ‘come after’ Rafael Nadal in warning 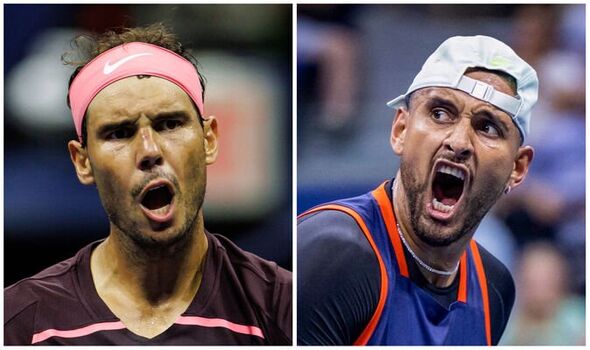 The response forced Petchey to backtrack somewhat before the Brit admitted he “would love” to see Krygios and Nadal go head-to-head in New York. He continued: “Of course he would and I would love to see Rafa play Nick in that kind of form. I’m sure he will feel that he can find a way that Daniil couldn’t.

“It does also lead to one thing, when you look at the dominance of the Big Four, they have had them challenges come at them and they have compelled them at every single time because they are better players and they have a better repertoire.

“What we saw tonight is we saw Daniil struggled to find somewhere else to go when Nick was bringing that tennis at him.” 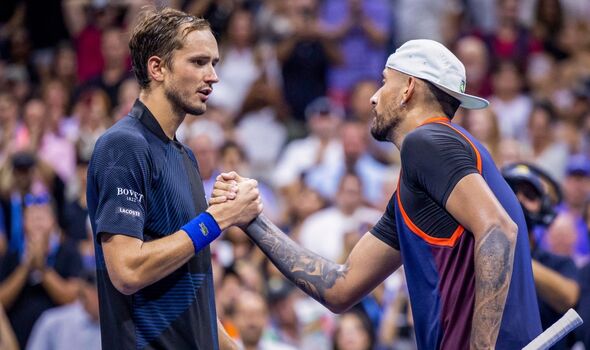 Kyrgios will now take on 27th seed Karen Khachanov, who overcame recent Montreal Masters champion Pablo Carreno Busta in a five-set thriller earlier on Sunday. The pair have met twice before and each have one success to their name; the Russian prevailing in their first meeting in Cincinnati three years ago, while Kyrgios emerged victorious from their 2020 Australian Open clash.

As for Nadal, the Spaniard faces American star Frances Tiafoe in his round of 16 contest on Monday. Given Kyrgios and Nadal are on opposing sides of the draw, the pair could well be set for a mouth-watering meeting in Sunday’s final.