Home » Tennis » ‘Maybe there is a political logic behind it’: Djokovic queries US Open vax rules

London: Novak Djokovic has questioned the logic of vaccination rules in the United States, with unvaccinated American citizens poised to be free to play the US Open in New York.

Djokovic told reporters that he couldn’t follow the “medical logic” of unvaccinated American players being free to take their US Open spots, while foreigners without COVID-19 inoculation would be banned. 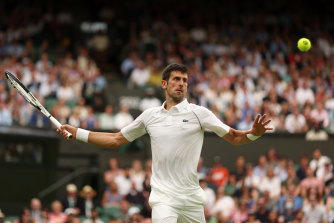 Novak Djokovic has questioned the vaccination rules that will allow unvaccinated Americans to play the US Open while unvaccinated foreigners will not be allowed.Credit:Getty

“It should be the case for everyone,” Djokovic told Serbian media in London.

Unmoved in his stance not to get vaccinated against COVID-19, the 20-time major champion is preparing to play only two grand slam events this year – Wimbledon and last month’s French Open.

“No unvaccinated people can enter the USA as of this moment,” said Djokovic.

Djokovic was deported from Australia on the eve of January’s Australian Open after initially being allowed into the country to play despite his vaccination status. He was chasing a 10th title at Melbourne Park.

The government prosecuted the case that Djokovic, who confirmed in February that he was unvaccinated against COVID-19, may have disrupted civil order and undermined the nation’s pandemic response.

At Wimbledon, he queried the logic of rules that are set to impact tennis pros during the American swing from August onwards.

“I would never even try to go to the USA if it is not allowed,” Djokovic said, as quoted by tennismajors.com.

“Some people think that I made that mistake in Australia, but it was the contrary in fact – I had the exemption etc, let’s not go over the same story again.

“Bottom line is: if I am told that I cannot go, I won’t go, I would never put myself in such a position. Even if I get in, they would see me on TV playing tennis and pick me up.”

Three-time defending champion Djokovic showed his title credentials with a two-hour straight sets elimination of Australian Thanasi Kokkinakis on Wednesday and, having already expressed hope about returning down under next summer, he repeated his stance that he holds no grudges against Australians.

“My intensity was basically like any other match really,” Djokovic said about playing Kokkinakis.

“I just tried to execute the tactics and game plan and do what I can to win the match. I did not have any extra intensity or desire to win this match just because Thanasi is Australian.

“In contrary, I really have a good relationship with Thanasi. He’s a great guy. We get along off the court very well.”

To play next January’s Australian Open, Djokovic must receive an exemption on compelling or compassionate grounds to receive a visa from the Australian government after it was cancelled for three years.

American Tennys Sangren also missed January’s major in Melbourne due to the widespread vaccinate mandate that affected foreigners seeking to enter Australia. But the two-time Australian Open quarter-finalist is expected to be free to play in New York.

Sangren highlighted the discrepancy for unvaccinated players such as Djokovic compared to American citizens.

“Pretty shameful that the [United States Tennis Association] won’t fight for an exemption for Novak,” Sangren tweeted this month.

“No surprise the government hasn’t changed its archaic policy. I can play but he can’t. Ridiculous.”

“On a more serious note, I have been texting with Tennys Sandgren a few days ago. I wanted to thank him for the public support he has given me in this situation,” Djokovic said.

“What he said makes total sense – if unvaccinated players are not allowed to compete at the US Open, then it should be the case for everyone.

“I don’t see the medical logic behind it, that Tennys can play because he is a citizen of the USA, and I cannot. If I had a US passport or a green card, I would be able to play. Maybe there is a political logic behind it – not medical – but I would rather not get into that and you can understand why.”

Watch all the action from Wimbledon ad-free, live and on demand on Stan Sport, with matches streaming in 4K UHD from June 27. Coverage of select matches commences on 9GEM from 7.30pm (AEST) each night.