Margaret Court, the all-time tennis great who has been a controversial figure in the sport in recent times because of her religious views, is to be recognised in the Australia Day honours list. 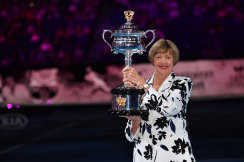 The names of those being honoured are sent on embargo to media outlets in advance of Australia Day to allow them to prepare material on the recipients to publish on the day.

But news of Court's award was made public on social media on Friday by Melbourne writer and broadcaster Justin Smith, who said he had been made aware of the honour by "other sources".

Court's achievements in the sport she dominated decades ago are unparalleled. She was the first woman during tennis' Open era to complete a singles grand slam, achieved by winning all four major tournaments – the Australian Open, French Open, Wimbledon and the US Open – in a calendar year.

Her record of major singles titles still stands 48 years after her last in 1973.

However, her views on same-sex marriage and homosexuality have led to calls for Margaret Court Arena at Melbourne Park to be renamed.

Former greats John McEnroe and Martina Navratilova used the 50th anniversary of Court's grand slam in 1970 to campaign for the arena to be named after fellow Australian tennis champion Evonne Goolagong.

Court is being given an AC for her service as a player and as a mentor to young sportspeople.

The website of the Governor-General says "individuals are appointed a Companion of the Order of Australia (AC) for eminent achievement and merit of the highest degree in service to Australia or to humanity at large".