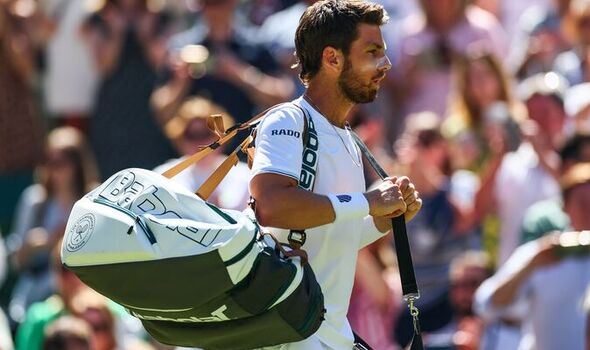 Harnessing the energy from a capacity Centre Court crowd, the 26-year-old home hope raced into a one-set lead. But he was left devastated as the Serbian six-time winner battled back to book his place for tomorrow’s final against Aussie Nick Kyrgios.

Norrie said: “It was the biggest match of my career.

“It was a good start, but it wasn’t enough.

His consolation is winning a legion of new fans and £535,000 as a losing semifinalist. Djokovic praised the British No 1 and ninth seed for “the tournament of his life”.

The clamour to catch a glimpse of his bid to become the first Briton since Andy Murray in 2016 to reach the final reached fever pitch in blistering sun at SW19.

And Henman Hill was renamed Norrie Knoll in honour of the South Africanborn, New Zealand-bred, LTA-funded and US-educated contender who has been cycling into Wimbledon from his home in East Putney.

Thousands flocked to watch on the famous mound, with queues snaking around the All England Club grounds.

The Royal Box was also full and due to the heat the court roof was partially closed so VIPs could watch in the shade.