Highlights from day 12 at Wimbledon

Novak Djokovic takes on Nick Kyrgios for Grand Slam glory in the Wimbledon men’s final this afternoon (2pm) and the added bonus of a cool cash prize of £2million. Djokovic is a 20-time Grand Slam champion looking to move just one major behind all-time record-holder Rafael Nadal.

The 35-year-old can become the fourth Open Era player to win Wimbledon in four successive tournaments after Bjorn Borg, Pete Sampras and Roger Federer. Only Federer (eight) and Sampras (seven) have more SW19 titles than the world No 3.

Kyrgios though has never played in a Grand Slam final before and still hasn’t even played in a semi-final of a major. He was due to face Nadal on Friday but the Spaniard pulled out due to an abdominal injury to give the Australian a walkover into the showpiece occasion.

Djokovic meanwhile came through British No 1 Cameron Norrie in his last-four match, with his victory putting him into a record 32nd major final. The two Wimbledon finalists are meeting for the first time in five years, with Kyrgios winning two head-to-heads at Acapulco and Indian Wells that year. 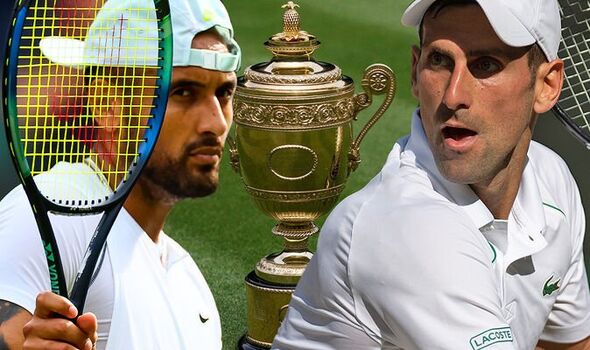 Good afternoon tennis fans and welcome to our live blog of the 2022 Wimbledon final. Serbian ace Novak Djokovic, who has won 20 Grand Slam titles in his career, is set to take on Australian Nick Kyrgios, who has never won a singles Grand Slam title, on Centre Court at SW19.