Tennis Grand Slams: Who is the greatest of all time?

John McEnroe caused fury on social media with his post-match comments on Emma Raducanu’s premature withdrawal from her fourth-round clash against Ajla Tomljanovic at Wimbledon on Monday evening. The teenage British hopeful was forced to pull out of the contest in the second set after receiving medical attention for an unspecified problem.

Raducanu gained plenty of admirers during her first Grand Slam outing at the All England Club, reaching the fourth round after a string of impressive victories against higher-ranked opposition.

However, she did not get the opportunity to progress to the last eight after she was rendered unable to continue by a troublesome issue that plagued her evening.

Speaking on BBC One after the match, McEnroe appeared to suggest that Raducanu simply gave up and was unable to cope with the occasion.

“I feel bad for Emma,” he said. “It appears it got a bit too much which is understandable, particularly what we’ve been talking about this last six weeks with [Naomi] Osaka.

“How much can players handle? It makes you look at the guys who have been around, and the girls, how well they can handle it. 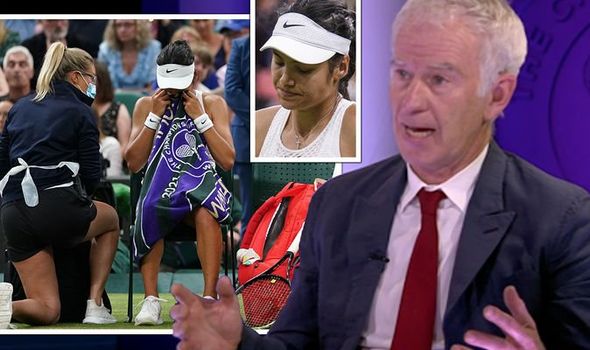 “People say: ‘You were so bad on the court, you used to misbehave’. But yes, I was the norm. These guys who can keep their composure, and the girls out there, are amazing.

“We have to appreciate the players who are able to do it so well and hopefully she will learn from her experience.”

McEnroe’s comments were widely criticised on Twitter, with many suggesting that his verdict on Raducanu’s withdrawal did not reflect the true nature of the situation.

Paul Newman wrote: “I think John McEnroe just suggested that Raducanu just bottled it and chose not to play because of the pressure.”

Iwannabeacontender responded: “In fairness to JM he’s called it as he sees it. Looked like a panic attack to me, poor girl.”